I've been quiet for a while. I started to research and read for a post and it grew beyond what I had expected.  Then I found myself enjoying what I was reading and the 'researching' took a bit of a back seat. I'm rethinking the scope of what I was going to write and will get to it a little later I think.

In the meantime a quick mention of two Kickstarter campaigns to look at for.  They are from two of the most reliable creators using the crowdfunding site and people I've mentioned on the blog before.


Firstly we have Northern Ireland's own Stuart John McCune with a one-shot science fiction, murder mystery comic, Cold Colony.  Stuart is the creator of Monologue, and a whole series of excellent comics available through ComiXology with samples and free issues available on his web-site.

All of his comics feature his own distinctive art style and are just that little bit different in terms of story and dialogue.  His visuals disturb slightly, but in a good way.  They are not 'easy' to look at.  They would not have been out of place in Heavy Metal magazine in the early eighties, when it used to good.

Things look just a little bit off, the colour palate is unfamiliar, his faces are not the usual comic book faces, but each are distinctive and expressive, his backgrounds are sparse or non-existent.  I described the art in Monologue, Stuart's ongoing series, as being 'elegant' and 'designed' and the same is true of all the images I've seen from Cold Colony.


Stuart describes this particular story as being in the tradition of 80's science fiction films like "The Thing", "Saturn 3" and "Outland".  Not quite sure about Saturn 3, I thought it was awful when it came out, but the other two movies are excellent throwbacks to classic older films.   The Thing being an adaptation of the same John W Campbell story "Who Goes there?" that Howard Hawks made into the 1951 movie "The Thing from Another World".  While Outland is a re-staging of the classic western, High Noon in a space station with Sean Connery taking on the Gary Cooper role.  If he can capture any of the atmosphere of those movies then I'm going to enjoy this comic.  Happily Stuart has reached his target already and all of the artwork is complete.   With only a couple of days left of the campaign, it shouldn't be too long until we get to see the comic in our hands.


Also on Kickstarter we have Andrew Pawley, with issue 3 of his psychedelic GalaXafreaks Dark Vibes comic.  Andrew has built a bit of a following now, so it only took a couple of days for him to reach his target.   A lot of that is to do with the fact that Andrew is one of the most reliable Kickstarter creators.  He's able to meet deadlines and deliver exactly what is promised.   Not always the case for Kickstarter.

But mostly the following is due to the comic itself.  GalaXafreaks is fun.  Psychedelic fun at a quantum level, with cosmic beings who talk like fifties hipsters or sixties hippies.  Issue two of the Dark Vibes series ended with a twist when the final details of Dark Vibe Overlord, Fuzz Muff's plan for multiversal conquest were revealed.  Only Captain Yeah and the Galaxafreaks can stop him.  And no, I've no idea what any of that means. 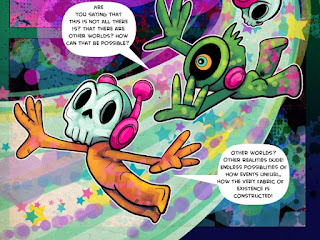 Included in this campaign is a trade paperback reprinting of the original GalaXafreaks series, issue one of which is now out of print.   I think all of the other back issues are available from Andrew's web-site.  You'll find the link on this page.

Those of you who check out acknowledgements in the front of comics will see that Andrew name-checks Splank! and even quotes some of my earlier comments on his new campaign page.  That's very kind of him.  As long as this comic continues to be as much fun as it is now I'll keep reading and writing about it.  And I'm hoping that you'll see some of Andrew's work in the Splank! comic when it finally appears.