While researching a post about fifties war comics I recently bought some issues of the long-running comic Sun.

They came from 1959 and were, to be honest, somewhat lacklustre compared to earlier issues I've read.  The paper and printing quality had been downgraded and, with the exception of an adaptation of "A Princess of Mars" the stories seemed mundane and tired. 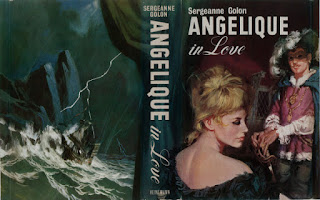 What's more, the covers of the comic had moved from colour to Black and White, with just the title and the "A Five Star Weekly" symbol being printed in red.   It was no surprise that the title was cancelled soon after.

But there was one redeeming feature, making a virtue of the black and white printing, I'd managed to hit a run of striking covers by illustrator Renato Fratini.

Just a few years later Fratini would grow into one of the best know illustrators of the period.  He painted cinema posters and covers for books.  It was when he was brought to London by the Downton Agency in about 1963 that his career really took off.  Fratini would produce posters for many of the Carry On movies,  for "From Russia with Love" and "Khartoum".  In 1970 he was paid £2,000, an almost unheard of fee for the poster of the epic Waterloo film.

He lived the life of swinging sixties London, marrying a fashion designer and hanging out at Ronnie Scott's Jazz club. 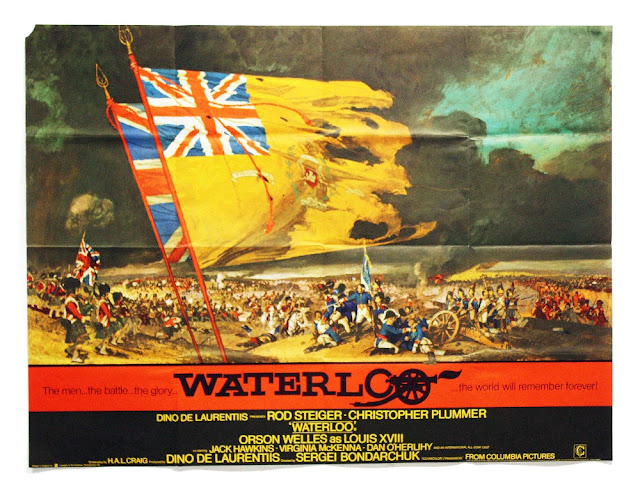 His comics work had all come in the late fifties, he had painted covers for Sexton Blake and Thriller Picture Library and finally produced these beautifully rendered covers for a few of the final issues of Sun.

The Sun comic ran from 1947 to 1959 a total of 551 issues.  Starting out as a mainly text-based story-paper, it had specialised in westerns and swashbuckling tales of old featuring pirates and outlaws.   Dick Turpin, Robin Hood and Billy the Kid had all been popular and long-running features.   Battler Britton was a late addition to the comic and one of the first war stories to appear.  By the time Fratini lent his work to the title, the writing was probably on the wall.  New comics like The Victor were on the way and Sun was looking tired.   I'm not sure how the Fratini covers would have been seen by the school boys at which Sun was aimed, but they look pretty special now.   I'll show a couple here in this post and save the rest for that other, longer post I'm working on.

More information on Fratini can be found in the second issue of Illustrators Magazines from Book Palace.

Big thanks for Steve Holland in identifying Fratini in the first place.   Check out his excellent Bear Alley Blog.

Posted by Ocadpete at 05:26 No comments:

Crowdfunding in general and Kickstarter in particular is becoming a more and more important source of money for comics’ projects.  When a huge name in the industry turns to this source of finance you know things are moving in a new and exciting direction.

Kevin Eastman, half of the team responsible for the Teenage Mutant Ninja Turtles phenomena and publisher of Heavy Metal magazine, is bringing his latest project to the Kickstarter platform.

Drawing Blood is a four part graphic novel telling the story of the co-creator of an indie comic sensation, “The Radically Rearranged Ronin Ragdolls”, that becomes a huge success making its heroes, mutant cats carrying Katanas, household names and its creators rich beyond the dreams of avarice.  The comic focuses on the creator once he is burnt out artistically and his money gone and the project will feature at least one real life issue of the fictional indie title that led to his success.

With David Avallone, who I know from some of his Pulp hero comics, Doc Savage and The Shadow, on board as writer and Ben Bishop, who draws a number of Turtle titles at present, as artist things are looking pretty good.  But I must admit that it is the idea of reading RRRR #1, with Troy Little on art that is the most interesting part of the project for me.

This is a big development for Kickstarter, Kevin is aiming high here, looking for $75,000 to bring this comic to market.   It’s one of the biggest targets I’ve seen and from a major figure in the comics industry.  If this works out, who knows, it might open the way for other similar projects.

Kickstarter provides a platform for creators to de-risk their activities to a large degree.  It allows for pre-orders from actual customers, pre-payment in effect.   Drawing Blood could have been published in a traditional way, it may even have been a huge success.  But it’s also possible that Kevin could have ended up with a huge warehouse full of unsold books and huge printing bill waiting to be paid.  This way, he’ll either have enough pre-orders to cover his costs and stay solvent, or he won’t print the books and nobody will have paid him anything.  It's looking good so far, nearly $29k in less than 24 hours.

Hopefully this works out and it means we’ll see more invention and more risks taken by creators.  I for one wish Kevin all the best for this campaign.  It might just be a game-changer for an industry that is, by some accounts, in danger of going under. 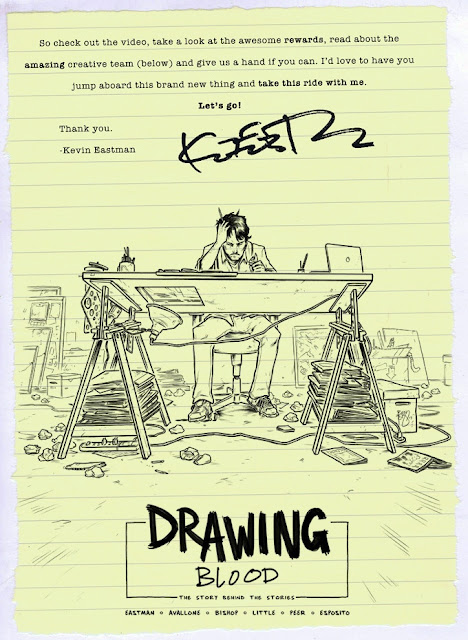 Check out the campaign here and see for yourself.  And while you are at it check out the rest of the Kickstarter platform, you'll find some fantastic comic projects there.

Posted by Ocadpete at 02:31 No comments: