The Rise and Fall of Sports Comics in 2000AD Part 1 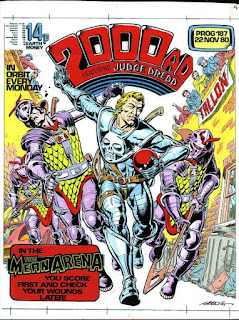 Comics have always seemed to 'adapt' stories from other mediums.  Sometimes this is a case of two creators having similar ideas at the same time.  It may be explained by some sort of cultural zeitgeist bringing creative people to the same concepts and ideas at the same time.  On other occasions its a case of taking a popular movie or TV show and twisting it just a little, adding just enough in terms of new ideas to make it arguable that the new creation is 'inspired by' rather than copied from the original.  But every so often creators don't even bother pretending, they just hope nobody will notice.  I think I've come across one of those cases, even if it is from a very long time ago.

I came across this particular case while examining why sports stories, which were so popular in the early issues of 2000AD seem to have disappeared from the comic, from almost all comics and I'll get to it in the second or third part of this set of postings.  So here we go with...

What made the early 2000AD unique was the merging of some fairly traditional British comics’ ideas with science fiction and a greater understanding of what kids actually wanted.  An almost anti-establishment attitude, that mirrored the concurrent rise of punk rock, was carried forward by the architects of the new comic Pat Mills and John Wagner into 2000AD from their previous successes Action, and Battle.

That being said most of the strips in early issues of 2000AD fitted neatly into the mould of established British comics.  Flesh was a western, with the cowboys wrangling Dinosaurs instead of Steers.  M.A.C.H.1 a spy strip, an adaptation of the Bionic Man idea that could almost have been seen alongside the Steel Claw in Lion or Valiant. Invasion, according to David Bishop's history of 2000AD, "Thrill Power Overload", was a strip that deliberately tones down Science Fiction elements and was seen by Pat Mills as a combination of a "Resistance Strip" and a tough guy story.  With the Volgans standing in for the Nazis and Savage taking the place of a Sweeney character.

Dan Dare was, well Dan Dare, one of the most Iconic characters in British comics, even if he was very different from his ancestor who appeared in the Eagle...

That left one spot for the first issue.  One of the most popular genres in British comics at the time was the sports strip.  The Eagle, with Roy of the Rovers, Scorcher, and Score and Roar had all been popular sports based comics and almost every boy’s adventure comic at the time had at least one sports story.  The success of the Rollerball movie in 1975 had shown that a sports story did not need to be based on a real sport to be successful and Action had featured "Death Game 1999" which eventually became Spinball.

2000AD number one had "Harlem's Heroes", a Pat Mills' story of a team in the Aeroball league, a violent version of full-contact Basketball with jet packs and body-armour.  It was a natural.  In the first issue most of the team are killed in an accident that recalls the Munich Air Crash where the famous "Busby Babes" Manchester United team were decimated in a similar incident.     Mills shared writing duties for the first issue with British comics stalwart, Tom Tully who would take over completely from issue 2.

Tully was an obvious choice, he had the reputation as someone who could keep a strip fresh.  Who could retain the interest of readers week after week, even if that was sometimes at the expense of the coherence of the overall storyline?

He'd been the writer on the Eagle classic, Heros the Spartan and had written fondly remembered strips like Janus Stark and Kelly's Eye for Smash! and Valiant.  He had form in writing sports strips, being responsible for Nipper in Scorcher and Raven on the Wing for Valiant and had been the main writer for "Death Game 1999" for Action.  Most importantly, perhaps, he had written scripts for Roy of the Rovers in Tiger from 1969 becoming the lead scribe in 1974, a job he would hold until 1993.

Art for the first issue was supplied by Dave Gibbons, the only British artist to supply a strip for the first issue.   A lot of artists had tried out, Spanish artist Carlos Trigo, who would draw the Visible Man strip for later issues, had prepared pages from the 2000AD dummy issue, Barry Mitchell had drawn a story and Ron Smith a splash page.   Gibbons has said that it was his design of the costumes, and their similarity to American superhero suits that got him the job.

Sports stories are, arguably, among the easiest of all genres to write.  The game provides a structure which, either, everyone already understands, or is one you invent for yourself.  The same plot can then be used over and over again, new gimmicks or some unique method of cheating for each of the teams your heroes face being all you need to give the illusion of a new story.  The difficult bit for a future sports story is the setting up of the sport.  The structure of the game.  It has to be understandable and make sense.  It’s also the most important aspect.  If the readers don't care about the game, they won't care about the story.

Harlem Heroes had a great set-up, it was easy to understand, it was flying Basketball with added violence.  As a sci-fi sports strip it was perfect and what's more the team gimmicks that Tully used worked well.  The early issues saw the Heroes take on the Baltimore Bulls, your basic dirty team, then move on to challenge the Siberian Wolves who upped the ante with a violent and reckless disregard for the safety of all players.

Pat Mills, who had originated the idea of the strip still had a big input.  In Prog 8 the Heroes faced Montezuma's Mashers and the arch villain of the strip appeared for the first time.  A Mills creation, Artie Gruber was a half-human cyborg, created from the mangled body of former Aeroball player injured in an accident while playing the Heroes.

Gruber, as drawn by Gibbons was grotesque, something straight out of a horror movie.  His look, perhaps influenced by Rich Buckler's Deathlok, was part of ongoing problems Mills was having with senior management at publisher's IPC.   While Mills, and later Kevin Gosnell, were editors of 2000AD each issue had to be checked by Managing Editor John Sanders to ensure it was not too violent.  In "Thrill-Power Overload" there is a story of him carrying out a weekly body count in the Invasion strip and asking the editors to "keep the body count down to under 90 next week".

The Harlem Heroes suffered badly from this interference.  The story-line was constantly being toned down against the instincts of Mills and what had been a very effective and popular strip began to run out of steam.   Gibbons was replaced on art by Italian artist Massimo Belardinelli for the final three episodes which looked rushed and little more than an attempt to end the strip as quickly as possible.

When the run ended after 27 issues, with the Heroes, unsurprisingly, winning the Aeroball championship, it felt like an anti-climax.  Only three of the team were left alive and the promise that they would return with a new, better game seemed hollow.  It did not look good for the Harlem Heroes.

Next:  Inferno, a Near Death Experience for 2000AD.