Hunters, Hardbacks and the Northern Lights - A look at Comics as Craft.

There is a genre of self-published comics that seems to be very far removed from the rest of the scene.  The artists concerned seem to come from a different starting point from many of the creators I've featured here before.  They show little sign of the influence of Marvel, DC, 2000AD or even Manga but owe more to book illustration or in some cases European comics.    I'm never been quite sure how to describe these comics so for want of a better term I'm going to call them Craft Comics.

This group of comics tend to have excellent production values with high-quality printing using paper stock you won't see anywhere else.  When they are good, they are very, very good and are objects to be treasured, but there are occasions where there is a bit of a case of "The Emperor's New Clothes", with form overwhelming content.  I've come across a few of those recently, but I prefer to write about the impressive stuff. 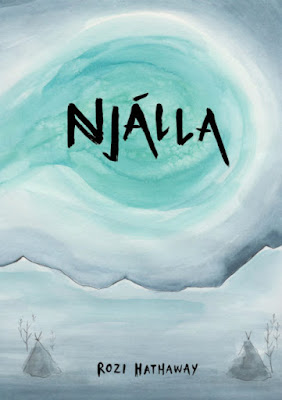 Most certainly in that category is the work of Rozi Hathaway.  Rozi produces beautiful pamphlet-sized, limited edition comics which tell stories that are mythical and simple.  There is no huge story-arc here, these are short stories at most, perhaps only qualifying as vignettes, but they are beautiful and somehow satisfying none the less.

I've bought a couple of her books, from her Etsy shop, (a good source for zines and mini-comics).  Firstly Njalla, issued in a print run of 250, is a story of the Sami people who live in the northern regions of Norway, Sweden, Finland and Russia.  It deals with their religion and folklore and more specifically with an Arctic Fox who runs through the mountains, igniting sparks, lightning and fires in the sky with his tail.

Many pages are wordless and in some ways these are the pages which are most successful in storytelling terms.  Rozi's style is illustrative and owes little to any comics I've read before.  The figures look to be drawn in pencil with colour added over the top using inks and Gouache.  The palate is a subtle mixture of blue and green, capturing the essence of both the northern lights, and the long northern night of the Arctic Circle.  The colours used and the shading have a natural, organic look to them and I find myself picking the book up from time to time just to look at a few of pages.

It's not a long read, and it does not have much plot to it, but I've kept coming back to it, and perhaps it’s just that it’s a calming, beautiful thing to look it, rather than I'm getting a deeply involving narrative but that's more than enough.  This is one of the self-published comics I've enjoyed most this year. 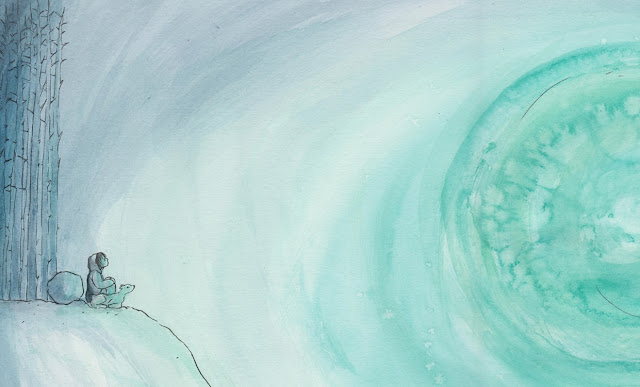 I also picked up, Ø.  It’s a short 16-page story Rozi submitted to "kuš! Comics" the highly regarded Latvian international comics anthology.   Ø didn't make it, but Rozi has once again done a beautiful job of printing to book herself.  In some ways this is a companion piece to Njalla.  The same mythic quality, the same swirling colour, the same illustrative style.  But Ø gives the feeling of summer heat, instead of blues and greens the predominate colours here are purples and pinks and there is a final page which would works as a single image on its on and I can't help thinking would make a stunning print.    The theme of the story is friendship and family.  Perhaps its not quite as strong a piece as Njalla, but its still visually quite stunning.  The two books seem to represent winter and summer, I wonder do we have spring and autumn on the way?

Rozi's fairly new to comics, but there is something special about all of her work, it certainly won't be for everyone but please, do take a look at her web-page and her Etsy shop where she sells her comics and "other shiny things"and see what you think.


On the other end of the size scale for what I'm still a bit dubious about calling craft comics is the London Company Nobrow.  Formed in 2008 by Sam Martin and Alex Spiro, Nobrow publishes the work of artists both new and established and from all over the world. 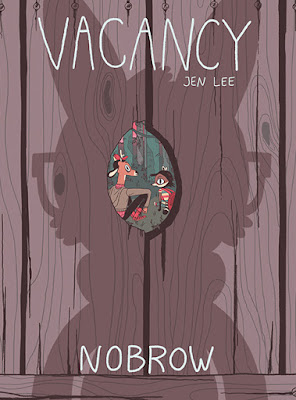 Their catalogue is extensive, mixing surreal, occasionally narrative free, art comics with beautiful books for children and illustrated biographies of people who have had a real impact on the world.  They sell cards, wrapping paper and sketchbooks, the companies’ whole ethos seeming to come from a design rather than comics perspective.  That isn't to say that they don't understand the requirements of comic creation.  There may not be much in the way of traditional comics coming from them, but I've never failed to find something of interest.

I've probably been most impressed by what they call their 17X23 range.  A set of beautifully printed, highly original comics from some superb creators.

As an example, Vacancy, by Jen Lee, is the story of a domestic dog left alone in a world without mankind.  His purpose gone, he has not dared to leave his yard and has been staring out into the wild woods.  Finally he's cajoled into pairing up with a racoon and a deer.    What follows is a freighting journey for the three new friends as they search for food and strive to avoid the "preds"      Jen Lee's art is stylish, capturing the oppressive atmosphere of the wild beautifully and her animal characters have all the vulnerability of teenagers lost in a dangerous world. 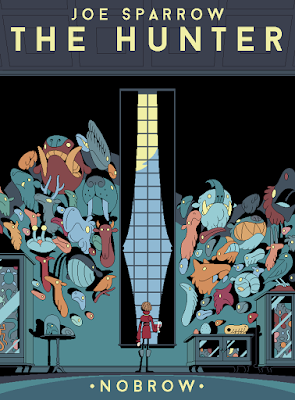 Joe Sparrow's "The Hunter" is a morality tale about a man who has sworn to kill one of every creature alive.  It has the feel of one of a Grimm's fairy tales and I don't mean the cleansed Disney versions either.  This owes more to Edgar Allan Poe than Sleeping Beauty or Snow White.  A thoroughly enjoyable tale.  Joe's art is a delight, deceptively simple and cartoon like, he manages to communicate feelings and fears perfectly in the wordless sections of the book.

Other books in the series worth looking at are "Golemchik" by William Exley, Bianca Bagnarelli's "Fish" and "The New Ghost" by Robert Hunter.   All of the creators have something interesting to say and all of the books are immaculately produced.

The rest of the catalogue is equally interesting.  I've recently read "Einstein" by Corinne Maier and Anne Simon, first published by Dargaud in France, it’s a fascinating biography that sat easily on the shelf with the excellent Logicomix that I reviewed in my previous post.  I'm now looking forward to their companion volumes on Freud and Marx.   2016 also saw the first volume of a trilogy of historical fantasies by Alexis Deacon, Geis a Matter of Life and Death.  A wonderful square bound hardback, which reminds me of storybooks from the forties or fifties.

Perhaps when the next volume comes out I'll write a full post on it, but for now I'll just say that it was one of the most impressive books I've read all year.

Nobrow are an excellent publisher, the material they publish is almost always original and and a huge amount of care is taken over every aspect of their production.  These are books that it is a pleasure to hold , the paper is always of a very high quality, the printing and binding of a quality you don't often see today and their selection of material is always fascinating.   Nobrow remind me a little of Fantagraphics, so long as you ignore the wildly pretentious stuff that the American publisher sometimes brings out, they have great variety in their offering and publish things you would simply not see anywhere else.    Check out their website here.

But just remember, there are many creators like Rozi who are doing it all themselves.  You can find them on Etsy or on Kickstarter and if any of you are reading this then please get in touch with me and I’ll be very happy to mention your comics in Splank!

The British comics’ scene really is very varied and vibrant and it does not take very much searching to find something a wee bit special.  Now Nobrow, how about talking to Rozi about an addition to your 17x23 range?