I'd been waiting for this one.  Epilogue is the final part in a sequence of comics from Northern Ireland artist Stuart McCune and his Millicent Barnes imprint and it was worth waiting for. 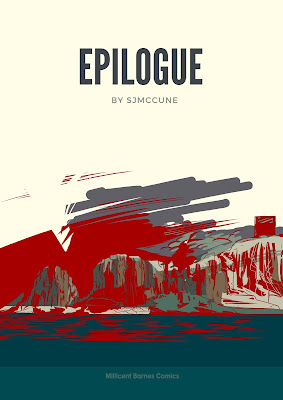 An A5, beautifully printed and finished, square-bound book, Epilogue has a stunning cover.  A bold and striking image of the island on which much of the Ghost story contained within its pages is set.   This isn't an easy read, it's probably Stuart's most ambitious story to date, with a theme that only becomes clear at the very end.

His words, mainly a first person narration, are carefully selected and at times have a strange formality to them.  This is a comic that benefits from a re-reading or two.  The ending changes much of what has gone before.  What seemed superfluous, sometimes meaningless dialogue, gains significance and at least one phrase which I took to be a mistake on first reading suddenly becomes an early clue to the twist in the story.

It is not a one-dimensional piece either, Stuart weaves multiple themes into this comic.  There is the story itself, but then there are little asides about the nature and artificiality of art.  At one point one of the characters insists that sometimes it isn't enough to consider a painting on its own, but that we should look at the actual paint.  An interesting idea in terms of a comic which I find myself picking up to look at individual pages separate from the whole. 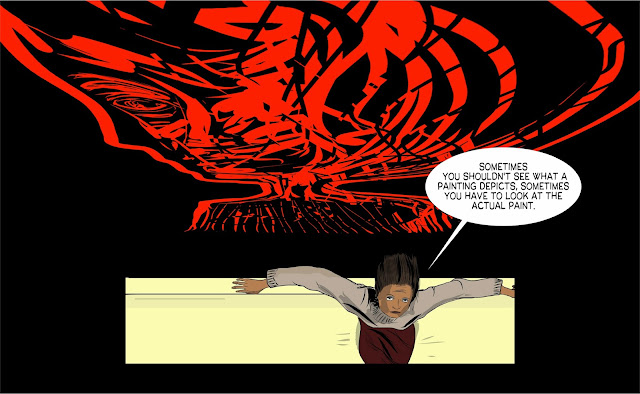 None of the 'Millicent Barnes Comics' Stuart's Imprint, make any attempt at 'realistic' art, in some ways they don't look like comics at all.  The closest we get is the geometric formality of his buildings, but in general his work has an impressionistic feel to it.  His faces can jar, having an animalistic, fluid aspect to them and the closest comparison I can make is to the wilder work of Bilal.

The whole tenor of Epilogue is oppressive, even when the characters are in a boat on the open sea, a dark sky gathers round them closing their world down.  Some of Stuart's previous comics have made great use of open space, with areas of solid colours giving the pages an out-of-doors, open feeling.  Not so with Epilogue.  The colour palate is dark and oppressive, with strong reds and a sickly yellow standing out against browns and other earthy shades Even the decision to print this book at the smaller A5 size seems to add to the feeling of claustrophobia. 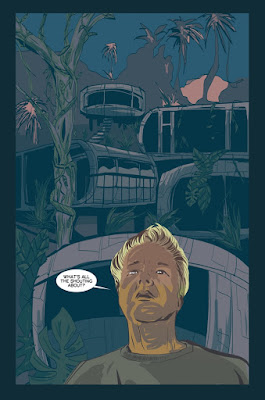 I said at the beginning that this was not an easy read, but it is a rewarding one.  As usual, Stuart's art is beautiful and the ideas in his story come through beautifully.  He has said that he sees this as the end of a sequence of books, that he will be starting something new, well this was a good way to end something.

Epilogue was funded through Kickstarter, Stuart's fifth campaign.  As ever, everything was completed on time and perfectly presented.   It's a stunning comic, something very special and I've not done it justice here.

I said in my previous post that the Millicent Barnes books have been among the highlights of my exploration of the self-published scene.  I shouldn't limit my praise, they are among the highlights of my comic reading.  In the eighties, when comics creators, and readers were trying to prove that graphic storytelling was a legitimate art form there was too much pretentious attempts at doing something different.   Most of the attempts were incomprehensible or ugly and boring.  Epilogue achieves all of those artists’ aims by being what it is.