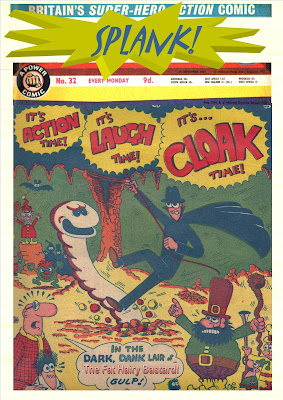 Welcome to the first post of a new British comics blog.  To kick things off we'll look at one of the most unusual stories in comics.   The story of Splank!, one of the very few comics ever to be sold solely in the Republic of Ireland.

In 1964, British Comic great, Leo Baxendale was lured away from the Beano and Dandy publishers D.C. Thompson by their great rivals Odhams with the promise of greater freedom and editorial control.  Baxendale had created many of the most popular D.C. Thompson strips, many of  which survive to this day.  The Bash Street Kids, Minnie the Minx, Little Plum and the Three Bears are just a few of his creations.  His art style, more frantic and anarchic than many of his Beano colleagues laid the groundwork for the look of British comics for years to come.

His frustrations with the management at Thompson’s together with the promise of more freedom and better quality printing for his work led to the creation of Wham! for Odhams, publisher of the rather staid and worth Eagle.   Wham! was to be a Super-Beano with strips by Baxendale himself along with fellow Beanotown escapee and the master of the grotesque comic strip Ken Reid.  Although, in the end, Wham! was not exactly the comic Baxendale had envisaged, it remains one of the funniest and most fondly remembered comic of the time.

An initial success, Wham! was quickly joined on the shelves by Smash! and Pow! as the excellent and still-anarchic humor strips were joined by the first regular reprints of Marvel Super-hero strips. (Apart from a short run of Kirby’s Tales of Asgard in Eagle).   The new line, adding in the all-Superhero Terrific and Fantastic became know as "Power Comics".  In addition to the standard school and scamp strips, the Power Comics line specialised in spoof spys and heroes.    "Eagle-Eye, Junior Spy" from Wham! was joined by "The Man from B.U.N.G.L.E." and "Grimly Fiendish" in Smash! and best of all Mike Higgs' "The Cloak in Smash!

An interesting oddity and a perfect example of what may have gone wrong with the Odhams line, Splank! was a short-lived Irish version of Pow!  It replaced the main title from issue 32 through to number 34.  Someone, probably an Englishman on the Odhams Staff, was concerned that Mike Higgs' Cloak strip, was featuring a villain called "The Leprechaun", something thought not likely to go down well in 1960’s Ireland.

At the time Irish/ British relations were not great and there had been complaints in the Irish press, mainly in the Sunday World, about the stereotyping of Mick the Marmaliser of Ken Dodd’s Diddymen as a violent, bad-tempered redhead. Indeed Dodd had been forced to cancel a series of shows in Dublin following the controversy, with the IRNPA (Irish Redhead National Provincial Army) threatening his life.

POW! was the best-selling comic in the Irish Republic at the time and Odhams were worried that the loss of Irish sales could be critical to the survival of the title. It was felt to be worth re-lettering the Cloak Strip to remove what could have been seen as anti-Irish sentiment and retitling the comic to make it more Irish.  Splank! was believed by the editors, totally incorrectly as it happens, to be an english version of an Irish word for bog oak.  It had been used to denote the sound of “a man being struck over the head with a wet plank” on Irish TV in a sketch on the Late, Late Show parodying the immensely popular Batman TV show.

The first issue of Splank!, numbered no. 32, went on sale in September 1967 and sank without trace. Careless production led to an early joke cover being used, one which used language not deemed suitable for children. The failure to change the banner from ‘Britain’s’ to ‘Ireland’s Super-Hero Action Comic’ meant that the Sunday World had another front page story. The title lasted only three, very badly distributed, issues before fading into oblivion.

Copies of POW! were transported from the North and were much more popular that the ersatz Splank!  For a month it overtook butter as the item most often smuggled across the border with Northern Ireland.  Not many issues survive and I came across this one in a bundle of old comics at a second hand book shop in west Cork owned by a sailor with a wooden arm.  Irish comics fans all know about Splank!, but few are willing to talk about it, there are so few copies in circulation that we want to keep them all for ourselves,  but word has got out and this article, published on April 1st, is our way of casting doubt on the reality of the comic.   But we know lads, don't we?