A very quick post about some British creators who have active Kickstarter campaigns running at the moment.   Some very interesting and varied projects that deserve the support of British comic fans. 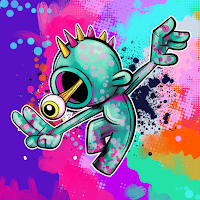 I've already mentioned Andrew Pawley's GalaXafreaks Dark Vibes campaign for issue 2.   Cosmic adventures that have the wildness of early undergrounds and the freakiness of Ditko Dr Strange.   Just a couple of days to go in this campaign but if you are in any way interested its worth getting in now for the added extras he is giving away to supporters.  Andrew is fully funded for this issue but I'm sure he'd welcome a few more advance orders.

Ness, from writer Chris Welsh and Dublin Artist Rob Carey, is a Lovecraftian horror story set on the banks of Loch Ness.   Chris wants to give the UK its own giant monster but somehow this looks much more interesting then Cloverfield or Godzilla and his friends.  The preview pages look fantastic. Rob's artwork has an atmospheric and cinematic style all of its own.  He must, or at least should, be on the radar of some of the bigger publishers. Chris already has a pedigree as a writer with his excellent Wart comic, digital versions of which are available as part of this offering.  Projected to run at least 4 issues this Kickstarter campaign is to fund the first.  There are still a couple of weeks to run on this campaign and again it is already fully funded. 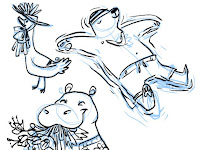 There's a Tiger on the Bus is something a little bit different.  It's an offering from 'Amy' or Tiger Tea as she is also known, for three short, brightly coloured, kids picture books.  Amy is an illustrator and designer and says in her campaign that this is her "first adventure in visual storytelling".   A useful video shows her creative process and you can clearly see that her style comes from classic children's illustration.  The first print run of "Tiger on the Bus" was handmade and this campaign is to have the books professionally printed and with a more substantial print run.   Each order comes with an A6 animal sketch done in India Ink, otherwise it's a pretty simple campaign.   I'm pleased to say that Amy is also fully backed and there are just a few days left to go.  Perhaps not the usual fare for Splank! but as something of a fan of illustrated children's books I'm fascinated to see how these turn out.

There's a Tiger on the Bus link

I suspect that these round ups of what I'm looking at in Kickstarter will become a regular part of Splank!  If you are a creator starting a Kickstarter campaign do drop me a line to the Splank! e-mail address if you are interested in being included.
Posted by Ocadpete at 09:46 No comments:

Splank! and The Grumpy Penguin

A few days since my last post and I've been busy researching something that connects Hammer Horror Films, The Two Ronnies, John Lennon, Buster (the comic) and stamp collectors.

This morning I received a lovely piece of art relating to a project I've hinted at a few times already, the idea is for a revival of Splank!* later this year with the marvel Superhero strips replaced with some home-grown adventure stories.  One character being developed is "The Grumpy Penguin" and the artist here is one Stanley Robinson. 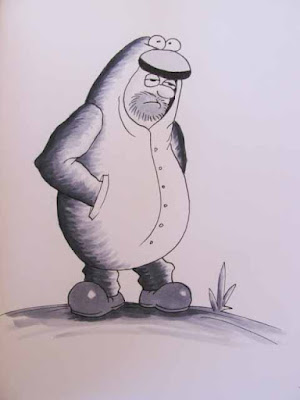 The idea for the Grumpy Penguin developed out of this short film, produced by my nephew for his 'A' level in 'Moving Images' a few years ago.  Somehow he persuaded me to play the part of Peter.  I hope you enjoy it and if you do I will pass on your good wishes to Jake Desmond who you can visit on his "JakesHomeVideos" YouTube site.

So from there, discussions with a couple of friends, Semtex Stan and Seedy Bob - both of whom appear in the film, got out of hand and ideas for comic strips were developed under the influence of strong painkillers and rye whiskey.  (I find Rittenhouse Rye 100 proof to be best for creativity).

Characters were developed, each based on the personalities or foibles of myself, Stan and Bob and a few artists were involved.  I'm saving the names of some of the artists involved for future posts but they include one of my heroes from the comics of my childhood and one of the funniest cartoonists ever come out of Northern Ireland or anywhere else come to that.

Over the next couple of weeks I'll be publishing more details of what we are after and some more preliminary artwork.  But if any artists or writers are interested in getting involved with Splank! the comic, please do get in touch using the splank@boxofrainmag.co.uk address.   We already have some fantastic people involved, but more of that in future posts.

Now, back to my research.


*See post number 1 for the history of Splank!, the lost Irish Comic.


While the commercial comics industry in the UK seems to be shrinking, there is no shortage of creators doing their own thing and using the crowdfunding phenomenon to finance their own self-published comics.   A quick look at Kickstarter today showed 184 live comic projects, with a good dozen or so from British creators.
One of these is Andrew Pawley’s latest GalaXafreaks comic, Dark Vibes no 2.  Andrew has previously published four issues of the GalaXafreaks comic and one of the proposed five part Dark Vibes miniseries.

Dark Vibes is the story of Meeko the Darkling.  A mild unsuspecting heroine thrust into an intergalactic stellar adventure that is beyond her, and at least at the beginning, my understanding.  But that doesn't matter, it’s the energy and the vibrancy of the artwork and the story that carries you along.


Beautifully printed in extreme colour on glossy paper with card covers, these 32 page tales of cosmic weirdness have echoes of Moscoso from the old underground Zap comics, of Steve Ditko's Dr Strange at its most outlandish and of what we used to call Saturday Morning cartoons, but which now seem to be on 24 hours a day.  His colour palette threatens to burn out your retinas and his figures are bold and unique.

The scripts are anarchic, wild, violent and cosmic.  Like Robert Crumb and Jim Starlin working on the Beano with a colourist recovering from some long strange trip he took in the sixties.  It came as no surprise to hear that he cites Leo Baxendale as an influence on his style and remembers laughing hard at Leo's Bash Street Kids.  He also talks about Mike McMahon and Kevin O'Neil from 2000AD and Robert Crumb as other artists who have had an impact on his work. 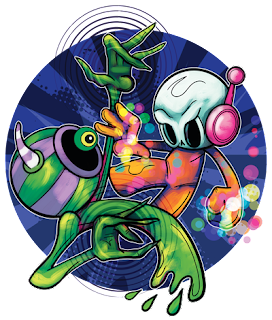 And once he mentions those particular artists you can see what he is getting at.   Each of them drew with a freedom and a freshness that was different from what came before them.  There is nothing in Andrew's artwork that looks like it was done by Baxendale or McMahon or O'Neil.   But there is the same spirit, the same disregard for the rules, and the fashions of current comics.  The same freshness of style.  Really, I'm not sure if I've seen anything quite like these comics before.

Oh and watch out for the 'Easter eggs'.  Lyrics from a few old Prog Rock bands seem to appear here and there, adding to the air of sixties psychedelia that permeates the whole project.  So, if you like what you see here, take a look at Andrew's Kickstarter Page and his GalaXafreaks web-site (links below).   This is the kind of high-quality production that deserves our support.

To try out the series issues 1 and 2 of the original series available as free downloads from the GalaXafreaks website.  And if anyone has a physical copy of issue 1 going spare, I'd like it to complete my collection.

Posted by Ocadpete at 01:17 No comments:

One of the most talented, distinctive and prolific cartoonists in Britain at the moment is Marc Jackson.   If you have any interest in current British comics you are almost sure to have seen his work somewhere over the past year.  His “Lenny the Lettuce” strip has appeared in the Beano.   He’s had Duckless in the wonderful on-line comic Aces Weekly and Ka-Punch provides much needed laughs to Comics Heroes magazine.

This May his Mr Pooch will feature in the revival of Deadline Magazine, “Missed Deadline” and he has a number of other strips in development, of which much more will be said over the weeks to come.

Somehow, he also finds time to self-publish his own comics under the Weirdo Comics label.  All, I think, are
booklet (half US comic) size and two have been released in the past month or so.


“Bionic Battle Rabbit” is a B&W 24 page comic with colour covers.  It tells the origin story of the Bionic Battle Robot and involves a game designer, Kill Bots and some of the best sound effects I’ve seen in a comic for a while.  There is also a great final panel reveal that I look forward to seeing a resolution too.   It’s a fun comic, quirky and beautifully produced and well worth the £4.50 he charges. 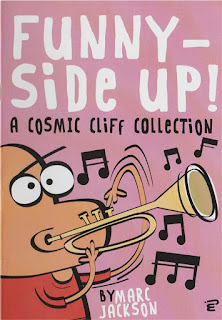 “Funny Side Up” is a set of single page three or four panel gags featuring ‘Cosmic Cliff’, a character who has fallen through a split in time, but is otherwise, apart from a slight physical defect, totally ordinary.   He and his friend Stan, a classic straight man, deal out some great puns and sight gags.  This would make a great newspaper strip.  It’s almost set up for that already.   Just rearrange the pages and you have something that would work well in any newspaper.   Full colour, and Marc make great use of colour, this is funny.*

Marc’s art style is unique.  You’re not going to mistake a Marc Jackson comic for someone else’s.  Deceptively simple, bold and sparse, Marc needs only a few lines to create a unique character.    Facial expressions seem to be shown by changing the angle of a single line.   It’s clever and it’s effective and it works in everything he does.

He cites Bill Waterson, the writer/artist of the celebrated Calvin and Hobbs strip as a major influence along with other American greats Fred Hembeck and Sergio Aragones.  But he admits to have being brought up on the Beano and Dandy and he brings something of the sensibility of those comics to his work.  Too often mainstream American humour comics are simply not funny, often being staid or predictable.   Following a formula set-up many years ago when Mad was first started as a comic.
Marc has some of the wildness of the best of British humour comics about him, but he understands the American comic scene and you can see that in his satire.  In some ways I think that is the thing that sets him a wee bit apart.

These are great comics.   Head over to his web-site to see details of what he has available and more details on his work, it's well worth your time.
http://www.marcmakescomics.co.uk/

*Marc has just contacted me to let me know that Cosmic Cliff is a newspaper strip, appearing both in his local newspaper and The Red-Hook Star from Brooklyn, NYC.
Posted by Ocadpete at 03:48 No comments: