Enniskillen Comics Festival, and other Activity in the Irish Comics Scene.

Splank! has been off the air for a few weeks now.  Other things taking up my time including a huge catch up project reading back issues of 2000AD and a rather nasty winter cold that kept me away from the keyboard.  But back now and hoping to keep up a more regular schedule this year and, with a bit of luck, a few non-blog related Splank! projects.

I'm going to start off 2017, a month late, with a few items on the Irish comics’ scene. 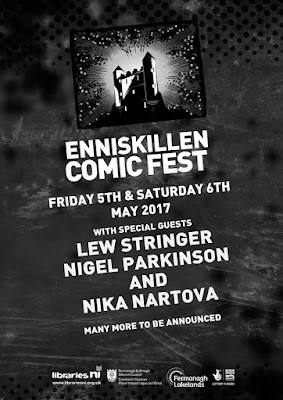 To begin with there is news of this year's Enniskillen Comic Fest which is taking place on Friday 5th and Saturday 6th of May.   Last year's event was something a little bit special.  At a time where it can be difficult to find the comics content in many an event described as a comics-con, Enniskillen was most certainly 'all about the comics' and this year is looking even bigger and better.

The guest list, put together by Paul Trimble and his crew, is excellent for any com, but especially for one taking place in the year of 2000AD's 40th birthday.  From the golden era of the title we have editor Steve MacManus, writers John Wagner and Alan Grant and artist Carlos Ezquerra.  Bringing things right up to date we have a current Judge Dredd writer, Michael Carroll and our very own Glenn Fabry who continues to be one of the most sought after artists in comics.

For Friday night, the festival has taken over the local theatre for its very own 2000AD 40th Anniversary celebrations.   A great guest list and an excellent venue.  Tickets, and more details of the event, can be found on the theatre's web-site which you can find here.

From the world of the Beano, Paul has lined up current Dennis the Menace artist Nigel Parkinson along with colourist Nika and Lew Stringer of Pup Parade.

Nigel has worked in British comics since 1980 on titles like Cor!, Whizzer and Chips, Nutty and the Dandy.  He's been involved in strips featuring Vic Reeves & Bob Mortimer and Count Arthur Strong and has set the look of the current Beano with a clean, dynamic style that pleases both the older reader like myself and the kids that Beano is really aimed at.  He and Nika are real favourites at cons and Nigel is a gentleman to boot, a real coup for Paul and the guys and something I'm particularly excited about.

Lew Stringer is the author of the Blimey Blog, one of the very best web-sites about British comics and has a long career working in the UK.  Recently he has had strips in Toxic, Doctor Who Magazine, Viz and, of course, Beano.   He is self-publishing reprints of some of older work, including the excellent Derek the Troll and the very funny superhero parody comic, Brickman Returns.  Lew was at last year's festival and is making a very welcome return.

Just announced is the first transatlantic guest. Canadian artist Yanick Paquette has been working in American comics since the mid-nineties.   He first came to attention working with Roy Thomas on TV-tie-in comics for the short-lived Topps comics’ line before moving on to DC.  In 2000, he was artist for Alan Moore's "Terra Obscura" for ABS and more recently has worked on many of the top titles for Marvel and DC comics.

What is special about this event is that admission to the Festival, which will take place in Enniskillen Castle, is free. That it involves community and last year at least arranged for the guests to visit local schools and talk about comics.  I know from talking to a few teachers in the area that this was really appreciated.

This isn't a money-making scheme, and it’s not about film and TV stars, it’s all about the comics.  It's run by guys with a real passion for their hobby and a real pride in doing a good job.  Last year this was an intimate and friendly festival, with an excellent selection of guests with a real emphasis on the British comics’ scene.  The guys are ambitious to make this as good an experience as possible and this year looks even better.

So maybe something to think about.  You might want to combine a visit to the friendliest Comics Festival around with a longer visit to Northern Ireland.  Take a few days to visit the Lakelands, the Giant's Causeway or the Titanic Centre in Belfast.  Northern Ireland is a great place to visit and if you do make the journey, make sure you let Splank! know you are coming and we can have a coffee at the very least. 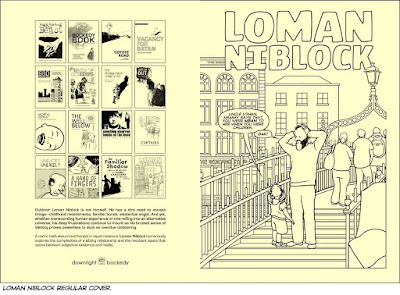 I don't think I've ever seen anything quite like it.  It’s warm and personal, funny and thoughtful and beautifully, but simply, drawn.  At its heart it’s the story of how a nervous, anxious childhood impacted on a boy and his younger, more confident sister.   Alternating between memories of Loman growing up and what can only be described as an adult existential crisis, it's a seamless piece of comics writing and quite obviously a labour of love.

John uses little tricks of style, the adult Loman and his family are drawn simply, but realistically.  The kids, however, are more akin to characters from old British humour comics.  They remind me a little of the numbskulls from the Beezer.  Yet the kids' portion of the story is more realistic than that of the adults where things get a little surreal.  A nice twist that works well.

John's depiction of childhood is particularly astute and accurate and you will find it hard not to smile at the pointless arguments over whose turn it is to answer the door.


I can't look at this comic and not comment on John's buildings and geometric patterns.  Every so often you come across a page that stops you in your tracks.  A building that is drawn with great precision, in the style of a high-end colouring book or the page that shows the kids by the Christmas tree which is filled with geometric patterns that seem joyful and magical.  And no, I'm not going to reproduce that, you have to buy the comic to see it for yourself.

I'm not sure if this is a comic I'd have picked up on my own, but it's a real find.  I've complained before about the pretentiousness of some 'slice of life' comics, especially those that appeared in the American scene in the eighties and nineties.   The Fantagraphics era where often, the emperor really had no clothes.  But this, like the autobiographical work of Lewis Trondheim, has substance and charm and to make it even better comes from an Irishman.

You can buy a copy of Loman Niblock directly from John for €3.50 including postage through his Tumblr page. 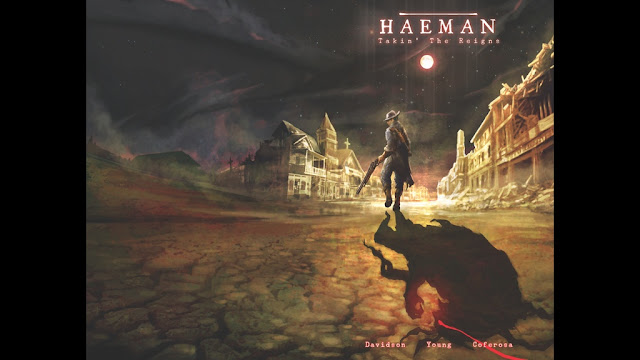 Something a little different.  Our friends at "Back-Pocket Comics” from Portadown in Northern Ireland have taken to Kickstarter again.  This time to fund the printing of their new 100 page Graphic Novel, "Haeman, Takin' the Reigns".  The guys are hugely enthusiastic and ambitious and their previous publications show huge promise.

Haeman looks be a western, but I think there will be a little more to it than that.  I'm hoping to get a wee preview of the comic in the next few days and I'll write more about it then, but in the meantime, please, do check out their Kickstarter andsupport their efforts. 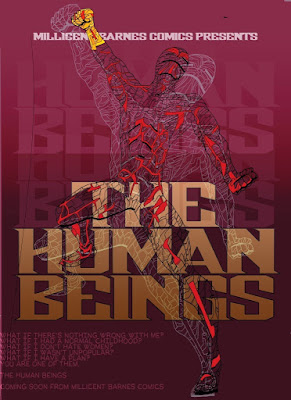 Last, and most certainly not least, this week marks the publication of "Epilogue" from S J McCune's Millicent Barnes Comics, a comic I've been really looking forward to.

Stuart has also released details of his next project, an ongoing anthology title called "The Human Beings".  In Stuart's own words, "With Epilogue, I feel like a huge sequence has closed and now it's time, completely, for the next thing".

Stuart's work has been among the highlights of the last year and my exploration of the self-publishing scene.  His comics are smart, elegant and entertaining and have a unique and interesting style.  I'm sure I'll be writing more about in them in 2017, but in the meantime here is the cover image he has shared for his new project.  I for one cannot wait.

Other titles are available through Big Cartel comics here.

Posted by Ocadpete at 07:08 No comments: