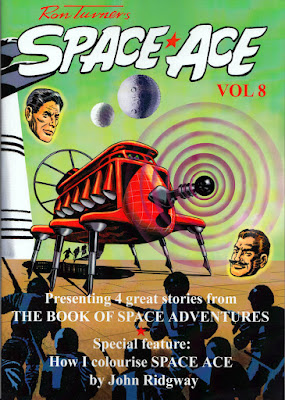 It was difficult to decide where to start on the little pile of comics I have to write about, so I ended up picking the title that was on my bedside table this morning.   A decision that may have been influenced by the fact that it saved me getting out of bed to start work on the post.  Tablet computers really are a blessing.

Space Ace vol 8 is a full-size, 40 page glossy, colour magazine reprinting some of the best work from one of the top Science Fiction artists ever to work in British comics.

Ron Turner's Space Ace stories were first printed in Lone Star magazine, a science fiction strip in what appears, from the covers, to have been marketed as a Western Comic.  Lone Star was an unusual publication, an early toy tie-in, it was launched by Die Cast Machine Tool Ltd in 1952 to sell their Lone Star toy range.  It was later bought by Atlas Publishing and ran for about 100 issues over ten years.  From the first issue it featured the Lone Star Rider, a western hero, along with Captain Cutlass the Pirate and space hero Ace Hart.  To avoid confusion with another space-based adventurer of the same name, Hart became Space Ace with the third issue.

Turner wasn't the first artist to draw Space Ace, but during his time on the strip he left an unmistakable mark on the hero and made him his own.  Space Ace was aimed at younger readers than some of Turner's comics, the Rick Randon series or the stories in Tit-bit comics, but were equally, perhaps more inventive visually than his previous work. 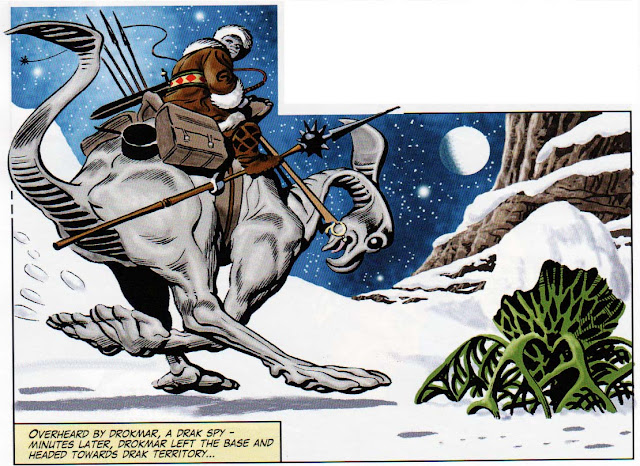 Turner excelled at drawing machinery and space craft, but also created the most fantastic alien creatures.   This issue features, in the story "Space Ace and the Rescue", a particular favourite of mine, the Kraits.  Long-necked battle mounts, that are dynamic and truly alien, well thought out and superbly drawn.   This story, set as it is on a frozen planet features an alien wearing what looks like to me to be a left over Santa suit, an unusual look to say the least.

This is Turner at his artistic best.  John Lawrence,  publisher of Space Ace and friend and agent of the artist, has said that Space Ace was a labour of love for Turner, and it shows.  A huge amount of credit must go to John who has gone to great efforts to show his friends' work to best effect.  Most of the Space Ace strips were printed in black and white or with a single colour.  John Ridgeway has been brought in to colourise the strips, re-letter then and give them a more modern look.  The effect is stunning and this issue is particularly good.  The colours added to Turner's artwork make this one a must have for fans of old scifi strips.  A John Ridgeway article on how he goes about colourising the strips is a great addition to a great issue. 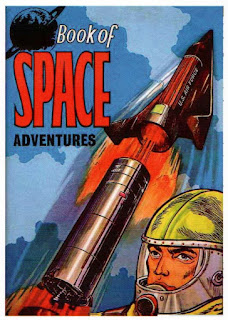 The stories in volume 8 have an interesting origin. When the Lone Star magazine came to an end in 1961 Ron found himself making most of his income from covers for Popular Mechanics magazine and the original paintings on which the 'paint-by-numbers' sets were based.


'Paint-by-Numbers' was the sixties equivalent of the adult colouring books of today and must have been quite lucrative.  But science fiction art was Turner's passion and when in 1963 he was offered the chance to draw Space Ace again, he did not hesitate.

The stories in this issue were all drawn for an Atlas Annual publication, the Book of Space Adventures that was supposed to be the first in a series, as far as I can tell only one issue appeared.   I've not seen a copy, but John Lawrence reports in his introduction to Space Ace vol 8 that the artwork was spoiled by a terrible use of colour overlays, all but destroying some of Turner's best work.  We should be grateful that John, and especially John Ridgeway, have rescued this work and made it available to British comic fans. I hope there is more to come as each issue I've seen so far has been a delight.

Copies of Space Ace vol 8 can be obtained direct from John Lawrence priced at £8.95 (UK), £13 (Europe), £14 (International) including postage and packing.  Payment by PayPal at:spaceace.54@virginmedia.com

Posted by Ocadpete at 05:49 No comments:

Normal Service Will Be Resumed As Soon as Possible.... 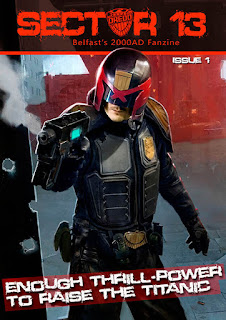 The Splank! blog has spent the past couple of weeks sitting in the corner feeling neglected.  I've been ignoring it and I can feel the disapproval each time I pass the PC.

I think I've had a decent excuse.  I've spent a lot of my free time during that time on a couple of projects that I've been very excited about.

To start with I've been involved with a 2000 AD fan group from Belfast, "Sector House13, The Pit Crew" and the production of their fanzine "Sector 13".   We launched the first issue at the excellent Enniskillen Comics Festival and did well in terms of sales.  Since then we've had steady orders arising through word of mouth and are expecting to sell out of the first print pretty soon.  The main stock is down to single figures but with more on the way in the next couple of days.

We involved as many members of the group as possible as writers or artists, but also got the Cosplayers involved in a unique photostory which looks so much better than any photostory I've ever seen before.  Two stories from Belfast writer W. D McQuade and his cadre of artists along with a couple of excellent posters round out the issue.  All in all we are very proud of the zine and are already hard at work on a second issue. 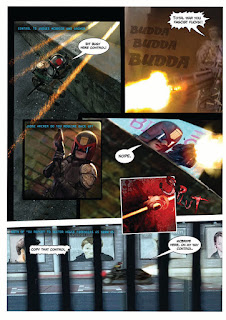 It did come as a bit of a shock as to just how much work was involved and how long it took to get everything done. but we got there, with just days to spare.

I do have to say a huge thank you to our printer, Cathedral Graphics, in Belfast.  We made quite a few mistakes and the guys there managed to cover most of them up for us and do a great job.

I also want to that John Farrelly for his superb Fitztharg illustration.  Fitztharg is our editor and was lured to Belfast to take advantage of the excellent quality of the Guinness.  perhaps it was a few too many pints that allowed him to let a few of the typos in Sector 13 through....

Sector 13 issue 1 is available from Sector House 13 for £6.50 post-paid (UK only).  We will, and have, sent copies the USA and Australia, but please contact us for prices.   Payment is by Paypal only to Sector13@boxofrainmag.co.uk, the same address to use for all correspondence.  Sector 13 is a loss making publication and only exists because of the enthusiasm of a small group of 2000AD fans.  Going from conception to realisation in just a few months was a remarkable achievement and a lot of people gave up a lot of time.  There will be a second issue and with the lessons learnt this time it'll be bigger, better and will feature fewer typos!


We're trying to line up writers and artists for future issues so if any readers of the Splank! blog are interested in contributing to a 2000AD fanzine as writers, artists or as graphic designers, please do contact us on the Sector13 e-mail address.

I've also been working on Splank!, the comic, with a few new writers and artists becoming involved.  I've even been trying my hand at script-writing myself and am gaining more and more respect for the art of the comic writer.  It really isn't easy to turn what seems like a simple idea into a script.

I'm delighted with our new recruits, John Robbins from Dublin has supplied a beautifully drawn three page strip and I'm working with a painter named Steve Viner on a 'Look and Learn' type factual piece for the comic that I'm totally thrilled with.

Dave Windett, ex of the Dandy and often to be seen in the pages of the excellent Phoenix weekly, is drawing a strip based on a script by Northern Ireland writer Glenn Matchett.  So far I've only seen the character design page and pencils of the first page. I think its an understatement to say that I'm thrilled.

I spoke to a few potential artists and writers at the Enniskillen Festival, and will be getting in contact with them soon to see what work I can wrangle out of them.  I'm pretty excited about Splank!, there are some very talented people already involved with more to come I think.


With the Blog taking a back seat I've missed out on writing about some of the excellent self-published comics that have come out in the past few weeks.  I'll be putting that right in the next few days.  The self-publishing scene in the British isles continues to be incredibly exciting with a huge variety of high-quality comics coming out on a regular basis.

In the pile to be reviewed in the next week or so are three of the best comics about, from any source, Chris Baldie and Michael Park's Space Captain, the wild and exciting GalaXafreaks back with the Timesongs mini-series and the first issue of S J McCune's ongoing anthology title "The Human Beings".    All are very different from each other and all are worthy of any comic fans attention.

From Northern Ireland there is, at last, the second issue of Solstice from Revolve comics to cover and a brace of ambitious graphic novels from Back Pocket comics.   Author of the Axel America novel and all around good guy, Andy Luke,  has published a collection of scurrilous stories and objectionable material named "We Shall Not Be Stapled" which I'll have to find a way to be kind about!

Then there is is the eighth volume of re-coloured reprints of top fifties science fiction artist Ron Turner's Space Ace stories and colourist John Ridgway.  (anyone have a copy of vol 1 they can spare to complete my collection?)

And all of this without mentioning the news of some exciting new collections of old British comics from Rebellion.

I'll have to get down to some reading (and writing) just now.