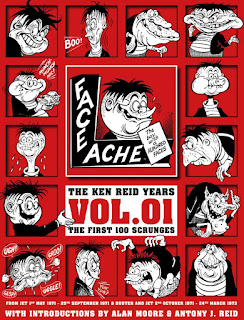 The release of Ken Reid's Faceache Vol 1 as Rebellion’s first foray into the humour archives of IPC for their Treasury of British Comics series is incredibly welcome.

This is a book featuring one of the most creative and inventive artists ever to work in British comics, one of the true greats of the industry.  And Faceache is Ken Reid at what is, almost, his very best.  But the tangled web of rights that Rebellion have to negotiate their way through means that the very best of Reid remains unseen.

I came across Reid's work for the first time as a seven year old.   I didn't know his name, but I knew his style.  There was something a bit different about Reid's strips, something special and a little bit naughty.  They were the strips you thought your mother might not approve of.

I would continue to see Reid's work for years but from July 1964 until March of 1969, over three comics and five different strips Reid’s work hit a level of creativity, freedom and energy that very few British comic artists ever come close too.  The comics, Wham!, Smash! and Pow! are more often remembered for being the first place to deliver the Marvel Superhero to the readers of British weekly comics but they contained what is arguably the best selection of humour strips ever seen in British comics.

It’s a tragedy that these strips are now caught up in the chaos around reprint rights and may not be seen by a wider audience until that gets sorted out.  But for comics’ fans of a certain age, The Power Comics line, as the three titles* were known are probably the best comics Britain has ever had to offer.

Ken Reid was already one of the true greats of British comics when he began to work on Wham!  Beginning his career in 1938 with “The Adventures of Fudge the Elf”, a newspaper strip in the Rupert the Bear format, which ran until 1963 in the children’s section of the Manchester Evening News.  He started working for D C Thompson in 1953, being the first artist on Beano icon, Roger the Dodger.    He drew “Grandpa” and “Jinx” for the Beano and “Little Angel Face”, “Bing Bang Benny”, “Ali Ha Ha and the 40 Thieves” and “Big Head and Thick Head” for the Dandy.

But it was the Beano based exploits of Jonah, a sailor so unlucky and incompetent that any ship he set foot on was doomed to imminent destruction that really stood out. Reid broke all of the rules of comics on Jonah.  He would cram up to 25 panels onto a small page, without any loss of detail or without the art seeming cramped or hurried.  He supplied manic story ideas, for which he was not paid, that made Jonah as surreal and weird as anything seen in D C Thompson’s flagship title.

His characters on Jonah were grotesque and hugely exaggerated, in a way that would influence a whole generation of comics’ artists to come.  He was one of the undoubted stars of D C Thompson, but bridled at their draconian controls and the inability to be known by name as the Jonah artist.

In 1964 he was persuaded to join Leo Baxendale on Leo’s pet project for the rival Odham’s publisher.  Wham! was to be a super-Beano.  Bigger pages, better printing, higher page rates and Reid would be allowed to write and sign his own strips and get paid for his ideas.   Gone would be many of the restrictions that Baxendale and Reid had toiled under at D C Thompson.  This was to be Baxendale’s comic and something Reid wanted to be involved in.

For Wham! Reid first created Frankie Stein.  Appearing for the first time in issue four, Frankie was the accidental result of Professor Cube’s attempt to create a blonde-haired little playmate for his son Micky who was constantly interrupting the Professor’s attempts to turn custard into uranium.   Despite looking like the iconic Boris Karloff version of Frankenstein’s Monster, Frankie was good hearted but clumsy, not knowing his own strength and driving his creator mad!

Most stories revolved around the fearful reactions of strangers to Frankie or to something he managed to break by mistake.   The artwork on these strips was to be seen to be believed, an enormous level of detail showing a real understanding of how far to take the horror elements and retain the fun and humour.

I remember seeing these strips for the first time a couple of years later, when I was eight and knowing there was something different about this strip.  It was anarchic, funny in a different way, ever so slightly rude perhaps just the sort of thing you imagined you parents not wanting you to read.   Frankie’s adventures ran in Wham! from the 11th July 1964 with the last episode appearing in issue 166, dated 19th August 1967. 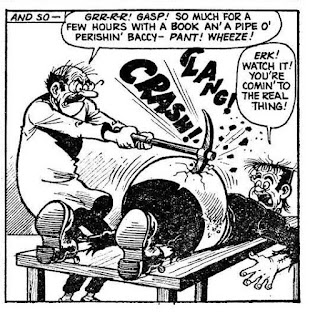 Towards the end of the strip things got weirder and weirder.  In the second to last episode, Frankie developed “German Measles” or “Nazi Pox” from his “tin tonsils” which had been made from a hammered out from a captured German helmet. And the final panel to appear in Wham! had his creator laying into his concrete encrusted stomach with a pick-axe.  It was a weird ending to an even weirder strip.

Frankie appeared in another couple of Wham! Annuals, but Reid was not involved.

Unsurprisingly the character was hugely popular and would be revived time after time.  First for Shiver and Shake, then for Whoopee and Monster Fun.  Frankie even got a few Holiday Specials all to himself.  But Reid was gone, the revivals were drawn by Robert Nixon.  A great artist himself Nixon made the character more popular than ever before, but for the Reid fans, the strip had been watered down, it was a good, strip, but there was most certainly something missing.

For anyone else Frankie would have been a high-watermark in their career, but for Reid there was more to come and a move to another comic.  But before we get there we have to look back at an earlier strip for Wham!


Back in 1965 Reid had introduced a new character.  Jasper the Grasper was the nickname of Jasper McGrab, a miserly old man living in Dickensian times.  His inspiration was obviously Scrooge from the Christmas Carol, but I wonder if there was anything of Harold Steptoe in there as well.

Jasper only lasted six issues, a mere 12 pages.  But he was something different for Reid.  There was more experimentation with layouts.  Reid’s work had never been static, far from it, but the first couple of episodes of Jasper had real dynamism in them. And he used the two page length to allow for larger, more impactful figures.   Jasper was different in some important ways, different but still with the same power and quality and the same attention to detail.  It was wonderful.

Why it lasted only 6 issues, I don’t know.   But again, the character was so strong that he would be revived later.  This time in the pages of the Cor! Annual of 1972 where all six episodes were reprinted.  (A fantastic find for fans as the Wham! issues are so rare).

Later on Trevor Metcalfe would supply his own take on the character in the pages of the Cor! comic.  This wasn’t a straight copy of Reid’s version.   Metcalfe had his own style, influenced perhaps by Reid and Baxendale but not with the same level of detail or anarchy.

Metcalfe made a huge success of Jasper.  The character surviving until the penultimate issue of Cor!  However enjoyable this version of Jasper the Grasper was, there is still the slight frustration that Reid abandoned, or was forced to abandon, the character so soon.  You can’t help but wonder what could have come next.

Next Time, a new comic, a new strip and Reid just gets better and better.

* Yes, yes I know.  There were two other Power Comics, Terrific and Fantastic, but they did not have any of the British Humour strips that Wham!, Samsh! and Pow! featured so they don't count.
Posted by Ocadpete at 05:50