In the first part of this post I wrote about Ken Reid, one of the greatest cartoonists Britain ever produced.  His work for D C Thompson on the Beano and The Dandy set standards and influenced styles in a way that can still be seen today.  His later work for IPC is currently being celebrated in the publication of a hardback collection of his excellent Faceache strip from Jet and later Buster.

But often forgotten are the very few years where he worked for the Odhams group on three weekly comics that allowed their artists a degree of freedom unknown in the British industry at the time.   In the first part of this post I covered Frankie Stein and Jasper the Grasper from Wham! the first of the Power Comics line and ended by asking the question, what would come next?

What came next, in 1966, was Smash!, a companion comic to Wham! probably best remembered today for the strip featuring, arch-villain Grimly Feendish who turned up in Alan Moore’s Albion or for its later, much duller, IPC incarnation which while featuring Janus Stark and Cursitor Doom was not a patch on the Odhams issues.

For Smash! Reid re-visited some old Beano territory with “Queen of the Seas”.  The maritime adventures of the ‘Buoyant Queen’, her Captain Enoch Drip and one-man-crew Bertram Bloop.  The strip had the look of his classic Jonah stories but, to start with at least, Reid was given two whole pages to work with.

The stories were bizarre, often not making a huge amount of sense, but they were funny in a way that recalled The Goons and pointed towards Monty Python.   There were elements of ‘The Navy Lark’, a popular radio comedy of the time, and of Laurel and Hardy in the team of Drip and Bloop.  If anything Reid’s art was even more free and wild, for the first 16, two page, episodes he used the extra space to continue his experiments with layouts that had begun on Jasper.


There were more of the impactful large panels which were all the more effective when contrasted with his habit of cramming many panels onto a page.   The strip in issue 13 is one of my personal favourites.  It contained a page and a half of compact, perfectly drawn panels, 21 of them with the last half page having just two,  Those two panels, of a flood heading for an ark built by Scottish madman Noah McNoodle, had real energy to them.  The contrast was a wonder piece of dynamic storytelling. What’s more, they acted as a real cliff-hanger as the story continued into the next issue, something that was very unusual for a humour strip.

With issue 20 Smash! underwent a major overhaul.  Hulk stories had started to appear in issue 16, but with the twentieth issue Batman newspaper strips took over the cover.  'Grimly Feendish' lost his colour back cover slot to Reid's 'Queen of the Seas' which shrunk to a single page.  The loss of the extra page was a disappointment, but the strip was just as wild and wonderful as before and was in a more prestigious place in the comic.

The strip continued with continued stories but was much more frugal with his use of large panels,
Reid ended the series in issue 43, with a story that featured a character calling for an end to violence in comics breaking the fourth wall.  He tried his hand at drawing a character who was supposed to be the hulk and ended the story of the "Queen of the Seas" its explosive conversion from ship to land based hotel on Brighton Beach.   By any measure Queen of the Seas was superb.   One of the highlights of those early issues of Smash!   But Batman and Hulk were probably the big draws for the comic and Reid was moving on again with another treat in store for us.

A couple of weeks after Queen of the Seas ended, the second companion comic to Wham! appeared.   With Spider-man on the cover and Nick Fury joining him inside there was no doubt that the superheroes were again to be the big draw in the comic called Pow!

Pow! was untidy.  The layouts were messy and unprofessional, especially the re-organised pages of the superhero reprints.  Some of the strips, especially the UK originated adventure stories, were really, not very good and there was no Baxendale.  But there was Spider-Man by Ditko and from issue three on there would be Mike Higgs’ “The Cloak”, for the seven year old me that would have been enough, but Reid provided something very special.

Dare-A-Day Davy was the next Ken Reid creation.  Almost certainly based in part on the very wholesome ‘Deed a Day Danny’, a Boy Scout who featured on the front cover of Knockout weekly during the fifties.  While Danny had been a helpful lad, determined to do a good deed every day, under the control of Ken Reid, Davy walked a different path. 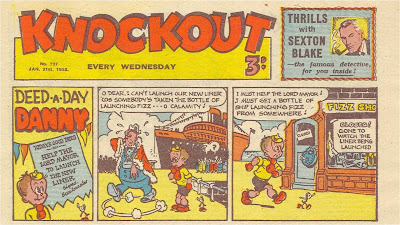 A reckless thrill-seeker, Davy accepted a challenge each week from one of the readers.   The author of the selected challenge getting a £1 reward for their trouble.  It was obvious that this strip was going to be very different from the very first episode.   Remember, this was in a comic for kids, eight, nine, ten year olds, but for Davy's first dare he had to ask out a "Smasher".  Obviously, it all ended in tears as the great looking girl turned out to be "Spotty Font" older, and equally spotty sister.

A pattern was set, Davy would take on a Dare, it would all go horribly wrong and he'd, usually suffer some dreadful injury and/or humiliation.  With the wildness of Reid's artwork that would have been more than enough to make this a worthy successor to his work in Wham!, but Red added some extra touches that made the strip even more interesting.

In many of the strips Davy is seen wrestling with himself, he hates the compulsion that forces him to take on the dares.  He is furious with the readers for sending in dare's that he knows will end in disaster.   His will-power, named 'willie' and depicted as a tiny cloud, is in a constant and fruitless battle with Davy Hyde, representing the forces compelling him to take on these tasks.

In one notable episode, in issue 19, Davy is dared to put hair removing cream in his mother's hair-spray.   This is a step too far, and he tries everything to avoid leaving his mother bald.  He still has to go through with the dare, but he finds a way to sabotage it so his mother will not be hurt.  As usual all goes wrong and Davy ends up totally bald himself sticking pins into a doll of John Holden who suggested the escapade.

The internal conflict in Davy is what made the strip so interesting.  It was something different for primary-school kids and it was very, very funny.  The strip ran for all 86 issues of Pow!, it survived the merger with the, by-now ailing Wham! in January 1968 before succumbing when Pow! itself was merged into Smash! 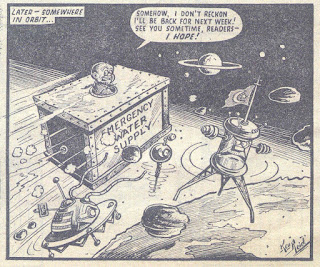 The final episode saw Davy stowing away on an amateur moon-shot in a daze of thoughtlessness under the influence of Davy Hyde.  The rocket, inevitably, failed, but Davy somehow found himself doused in a mixture of top-secret rocket-fuel and farm fertilizer standing in a water tank that shot into space.  Davy's final words to his readers were "Somehow I don't reckon I'll be back next week.  See you sometime readers.  I hope!”

It was a fitting end to what had been, in the words of Lew Stringer, ”perhaps the most subversive of Ken's Odhams Strips".  Davy was never to be seen again, well that's not quite true.  In 1968 David Britton, of the soon to be notorious Savoy Books, published the first issue of the fanzine/ underground comic, Weird Fantasy.  In it was a missing story of Davy that had been judged too gory for the readers of Pow!

At the suggestion of Vance Gledhill of Blackpool, Davy was dared to dig up Frankenstein's monster and bring him back to life through the kiss of life.  It's difficult to know what it was that the editors of Pow! objected to, there was so much to choose from.  Was it the desecration of a grave, or the re-assembling of a shattered skeleton, or perhaps the sight of a young boy kissing a corpse?  They had so much to choose from. 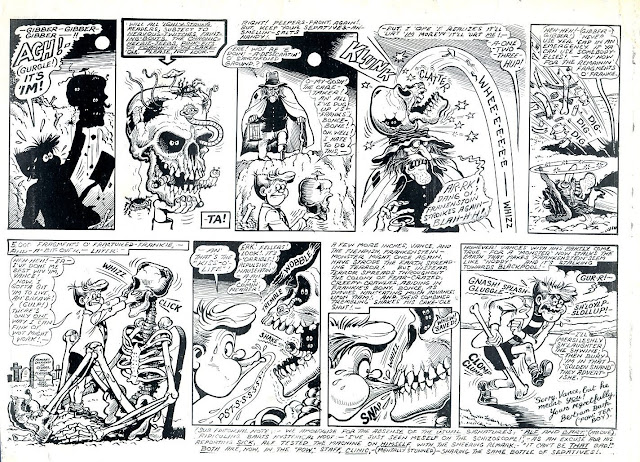 It has to be said that Odhams treated Reid properly, he was paid for the strip, and for its replacement, it just never saw publication in an Odhams magazine.


A character obviously based on Davy did appear in Valiant from 1974 until the end of the Valiant run.  Challenge Charlie took the basic premise of 'Dare-a-Day', and the reader's fee had increased in line with inflation to £5.  But the inner conflict was missing and the level of comedic violence considerably toned down.  The art, by Frank McDiarmid was great, but it lacked the manic, anarchic wildness that Ken Reid had at its best.

I still recall getting Pow! as a kid, usually before we visited my grandmother on a Sunday.  Spider-Man may have been the first thing I read, but Davy was always second and there was something very special about him.  Something I was sure my parents would probably not approve of.

Next, Reid went back to Smash!, the only remaining title in the Power Comics Line*.  And that's an interesting story too.   Next time folks.

*yes, yes I know Fantastic was still going, but it was a different sort of comic altogether.