Return of the Living Splank!

I've neglected the Splank! blog of late, I've been busy with Sector 13, the 2000AD fanzine and a couple of other projects that I'll get to pretty soon.  I've built up a pretty impressive pile of great self-published books that I've intended to write about  but never quite got round to it.  So I'm going to try to start to put that right now. 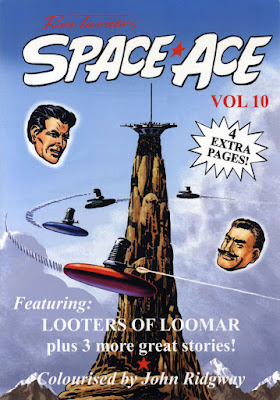 First up one of the most recent arrivals, mainly because it is fresh in my mind and close to hand but also because it the latest in a series that I've really been enjoying.

Space Ace Vol 10 comes from John Lawrence and reprints more of the stories by one of the best science fiction artists in British comics history, Ron Turner.  Space Ace was written and drawn by Turner for Lone Star Magazine in the late fifties and early sixties, was originally in black and white and was produced for one of the lowest page rates Turner ever worked for.

Space Ace really is a strip of its time.  The influence of Dan Dare is all over it, and the plots and dialogue really are from a  different age.   But the artwork is superb and the colouring, by John Ridgway really brings it to life.  Every page is a delight and the design of spaceships and aliens hugely inventive and visually fascinating.

Editor John Lawrence, in his truly informative editorials, is quite honest about the way in which Turner approached these strips.  When hard pressed some of the strips would be repetitive or even a bit lacking in plot.  As a result he has been careful not to put anything sub-standard into any of these issues, but has found a great way of ensuring that none of Turner's great artwork is lost. 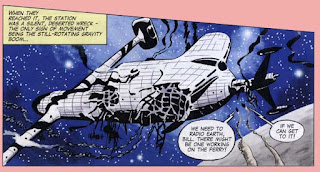 By combining stories, where maybe one is lacking in plot and another in action, he had created 'Frankenstein's monsters'.  Strips that are better than the sum of their parts.   Volume 10 has another of these stories.  "The Looters of Loomar" takes the strip of the same name from 1958 and combines action scenes from "The Acid Test" from two years later into a seamless tale.   They are of their time, and aimed at a younger audience than most comics seems to be today, but the plot moves well and the art is what most readers are there for.   Nobody does aliens or hardware like Turner as this issue clearly shows.

Volume 10 is four pages longer than previous issues, features the second part of John's story of Space Ace and a substantial letters page.  Overall it's a delight to see these comics from a different era.  A time when the future looked very different.   Ron Turner was a great comic artist and I think he'd be delighted that his old friend and agent, John Lawrence is making sure his work is still out there and looking better than ever. 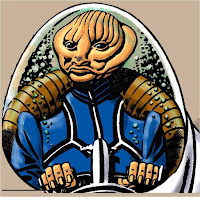 John reckons he has at least two more issues worth of Space Patrol material to go and I'll be looking forward to seeing them.  Ordering details are included here and you can ask about back issues at the same time.  Now if only I could find a copy of issue one to complete my own collection! 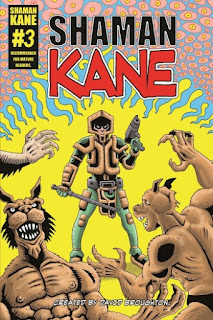 Shaman Kane is a supernatural, science-fiction adventure comic from David Broughton.  It came out in 2016, but I've just read it and thought it deserved a mention here.  His titular hero is a "Licenced occult operative" with a mission to terminate or capture occult entities across space.  David is a 2000AD fan, his distinctive artwork has appeared more than once in Zarjaz the 2000AD fanzine, and there are both visual and thematic similarities between Shaman Kane and Strontium Dog from the Galaxy's greatest comic.   But mostly what there is, is a set of strips that are high on action, filled with jokes and have a special infectious energy to them.  David's art is deceptively simple, but It's incredibly effective and his story-telling skills are great.

Issue 3 opens with Kane, Sable, his dead ex-partner (in the termination business), Annie the artificial intelligence and his childhood friend, Shaman Jane Rain on board the Star Liner, Dante.  They are tasked with uncovering the cause of a spate of outbreaks of the dreaded zombie plague. 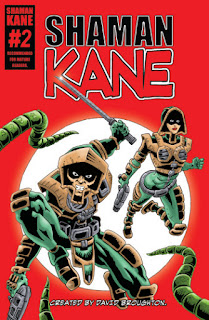 In the course of three episodes we meet a death metal singer, a couple of very recognisable parodies of TV personalities, a bunch of werewolves and the inevitable zombies.   We also see artwork that improves as the issue goes on and ends with a set-up for the next story. Which I do hope he's working on now!  This is 28 pages of fun, I should say it bears a mature readers label, but there is nothing to worry about in here.

I've read all three issues and really enjoyed them and if a fourth comes out I'll be first in line.  I've read a few other things David has done, mostly working with a writer, but the three Shaman kane comics are the things I've enjoyed most and I'd most certainly recommend them.

Check out his Comicsy page here.   You won't regret it. 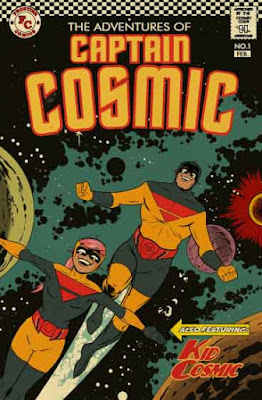 Finally this time round a brand new comic."The Adventures of Captain Cosmic".  For readers of a certain age this is going to take you right back.  Captain Cosmic is like the DC comics I used to read in the mid sixties.   The writer/artist Andy W Clift has produced something that seems to mix elements of old Mort Weisinger Superman comics with aspects of the Space Ghost TV show.

There is an opening page with some Kirby Crackle and scenes of alien life that remind me of  the early days of Green Lantern's sojourns into space.  Everything about this looks right, I really enjoyed the artwork and even the set-up of the story was working well for for me.  My only disappointment, and I mean only, was that the plot used was too close to a story I remember reading - albeit nearly 45 years ago.  I read this story in the sixties and there were simply not enough surprises for me not to feel slightly cheated.  Maybe for a younger audience this wouldn't matter but it somehow it did for me.

The bad guy's plan was instantly recognisable as belonging to a well-known silver-age villain.  And he's even been given the same coloured skin as his predecessor.   I won't say it spoiled the comic for me, it didn't, but it all seemed just a little too close.

Andy's art is great, this comic looks great and has a real sense of fun to it.  I wonder would it be even better with some help on plot from a writing partner?

I'll be coming back for the next issue either way.

You can get a copy of Captain Cosmic number one from Andy's Big Cartel page here.