A couple more interesting Kickstarter projects from this side of the Atlantic to talk about.  They show the real variety of comics that creators are using the crowdfunding system to finance.  From ambitious 'artistic' comics to things that resemble fan fiction or the type of strips that used to appear in fanzines and the like.  It also shows creators in different parts of their comics career.   In today's example we have a contrast between an experienced visual artist and someone who, I think, is just starting out.  Its fascinating to get the chance to see these contrasts and through crowdfunding to support the diversity of creators in the comic medium.

To start with this time round we have second issue of Monologue from Stuart John McCune.  Stuart is a visual artist from the Ards Peninsula in Northern Ireland who has been exhibiting in galleries across the province since at least 2009.  At the same time he has been making his comics available through Comixology under the Millicent Barnes comics imprint..   His latest Kickstarter project is for the second issue of his Monologue comic. 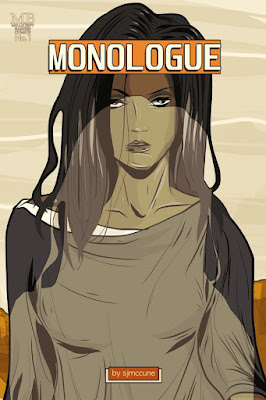 Monologue issue 1 came out last year and was one of the first projects I backed through.  An incredibly striking comic, his use of empty space and block colours is the first thing you notice.   Each page, no matter the content, is 'elegant' in its design, a word I am drawn back to time after time as I work my way through this issue.  This is graphic design as storytelling, there is something of modern magazine layout to every page. It has a different look and feel to that of most of the comics I read and that adds to the story Stuart is telling.   The plot is, as the title suggests, told through the internal monologue of the main character.  She is acting as a, perhaps unreliable, narrator of incidents that may be happening to her or may occur only in her mind.  As I moved from page to page I was drawn into the story and into the mind of the lead character  Often comics where the visuals are as different and as strong as this are lacking something in terms of story, a case of style over substance.  But that isn't the case here.   I'm really looking forward to the next issue and have no problem at all recommending this. In terms of Stuart's influences, I can't tell, I was put in mind of an episode of Breaking Bad written by Philip K Dick but that could well be me bringing my likes to the comic.

If I had one complaint it would be that its been too long between issues.  The Kickstarter campaign still has a few days to run and has already reached its target.  Both issues are available as rewards or you can pick up the first issue on his web-site.  I've included the link for the Kickstarter page and you can find your own way to his other sites from there.


Something very different is Matt Clarke's Renegade Pilot.  A space epic, which appears to take its inspiration from Manga and perhaps role playing games.  This Kickstarter is to pay for the production of the third issue, but he is offering copies of all three issues as rewards.   Matt was kind enough to send me a review copy of the first issue. 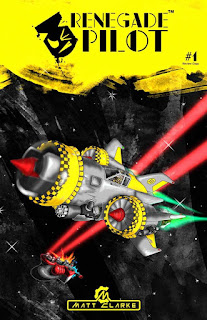 Its an all action affair, with a kidnapping and a space dog-fight between retro-style space-fighters.    Its full of energy and the plot moves along quickly.  I think Matt needs a little help with the scripting, even someone to talk through the dialogue with before he finalises it.  Some of it is a little awkward and there is a bit of jarring repetition that slows down the action from time to time.

The artwork is typical of this type of Manga fan-art, perhaps not professional standard, but with good storytelling and easy to follow action.  I'm not the target audience for this and Matt seems to understand this style of comic very well, if you like this sort of Manga inspired space stuff, with a bit of a mystery element then this could be just the thing for you.  I'll read and, I think, enjoy all three issues but it not really my thing.

Matt has been working hard to add  some interesting extras, including posters, tee-shirts and 3d printed models of the featured Space craft.


Its great to see so many British and Irish creators making use of Kickstarter, it seem to be one way to support an industry that has shrunk over the past few years.   I'll keep searching for interesting projects and bringing them to your attention, anyone out there who wants me to mention them on the blog, please contact me at the Splank e-mail address.  I'll always give a totally honest assessment.