Splank! has been on holiday for a week or two, lots of unexpected events and a very pleasant school reunion to organise left little or no time for reading, never mind commenting on, comics.  But the postman has been my friend while I've been away.  No credit card bills or tax demands, just a trickle of interesting comics-related post that I've been catching up on. 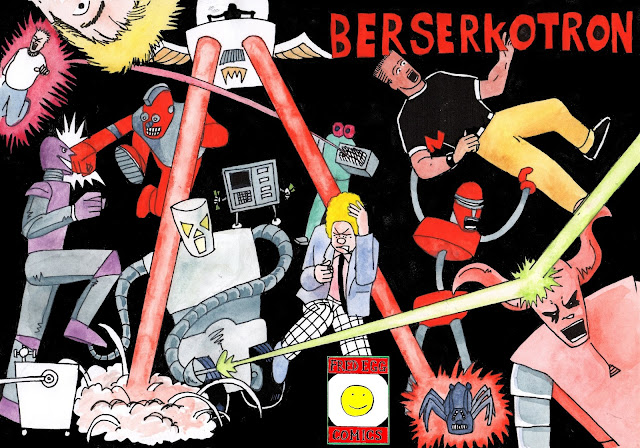 First I have word of a new comic from David Robertson's "Fred Egg Comics".  Berserkotron is a collection of strips which David put together for the APA, "Shiot Crock".  For the uninitiated an APA or, most usually, Amateur Press Alliance, is a publication put together by a group of people who, on a regular basis, produce and, usually, print their own magazines or 'zines'.  The zines are send to a 'Central Mailer' or CM, who collates the zines and distributes anything from 20-50 copies of the combined contribution to each of the members of the APA.

APAs or apa's, as they are often known, come in many styles and cover a huge range of subjects.  They have a long history in fantasy fiction.  The horror writer, H P Lovecraft, was a member of the United Amateur Press Association, from 1914 and comic fandom really started with CAPA-APA which featured Comic writers Roy Thomas, Mark Evanier and Wendy Pini among its membership.  Other comics based APAs have included APA Five whose members have included Frank Miller and Concrete creator Paul Chadwick.

At the moment I'm aware of at least one comic and one music APA that are active and healthy on this side of the Atlantic.  I'm sure there are more.

Shiot Crock was a little different from most APAs.   It referred to itself as an Amateur Press Anthology and had a rotating EC or (Editor /Collator) rather than a Central Mailer.  It combined mini-comics from up to 40 creators an issue and was distributed only to contributors.  Whereas the lifeblood of most APAs were the comments sections where each member would discuss the previous issue, Shiot Crock members used the Comics Journal Forum to discuss their zines. 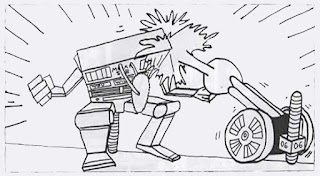 Berserkotron collects all of David's contributions for Shiot Crock plus a few more strips which finish off the story.   Like his previous comics, David's work in this comic is obviously a labour of love.
The story, which is half workplace soap and half killer-robot adventure, made me laugh and kept me entertained throughout.

His art is functional and adequate, but not what would be regarded as being of professional standard.  And, really, it’s not intended to be.  I’m growing into an appreciation for what this and titles like it are all about.   This is the punk rock of modern comics.  Ok, maybe you can't draw well enough to get work for Marvel or DC or 2000AD.  What the hell, you've got something to say, 'just do it'.

David has a story to tell, and its one I enjoyed and could really appreciate the work he'd put into it.   I hope a few of you will take a look at his blog and see what he is doing, you never know, you might fancy giving some of his comics a try. 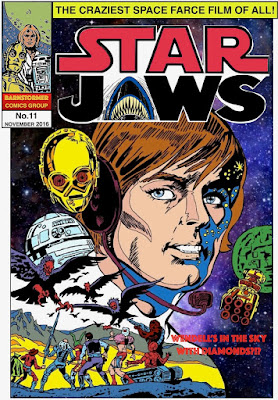 Next, another issue of the excellent Star Jaws appeared.   It’s difficult to describe this title from Robin Barnard and his Barnstormer Comics Group.  It's a must for Star Wars fans.  An effective and funny parody of old Marvel Star Wars comics, it currently features a battle between Princess Heather, Wendell, Robert and Paul, who look very familiar, and bad guy Sergio Aragones, along with single page gags from Martin Hand who does a great line in re-drawn, re-dialogued Marvel comics.  Star Jaws is always funny and should be essential reading for comics’ fans of a certain age.  You can find each issue in its entirety on Robin's Blog, Images Degrading Forever.

The product of a Kickstarter project, the second issue of Ness, a British Monster comic set on the shores of Loch Ness arrived on my doorstep.  I was a little hard on the first issue, I must have been in a grumpy mood.

Ness is the work of writer Chris Welsh and Dublin artist Rob Carey.  I still have the feeling this is going to be best read in a single sitting once the entire series is complete.  Chris has paced the story for a graphic novel and each episode seems to be a bit of a quick read.  But I'm much more content this time round as the story has moved on so I don't have any of the same frustration I felt with the first issue.  It's Lovecraft inspired with ancient evils and modern rural cultists.  There are hints of old families with dark secrets and links to Celtic mythology.

Rob Carey's art is superb throughout and with colourist Dee Cunnffe adding considerably to the atmosphere this is one of the best looking of a plethora of Mignola-inspired horror comics that are featured on Kickstarter at the moment. 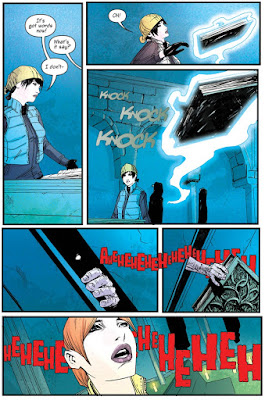 Part of my frustration with the first issue was an indoor sequence with a dreadful bare, brown background that irritated the hell out of me and was totally out of place in the comic.  Nothing like that here at all, this is an excellent horror comic and I've already signed up to the Kickstarter campaign.

Overall Chris Welsh is doing a good job on the story, capturing the Scottish 'accents' and dialect perfectly but Rob Carey looks to be a real star of the future.  The opening sequence, which culminates in a great full page image set in a church, is about as good as I've seen in this style of comics.  Watch out, I think Rob has great things ahead of him.

You can find the Kickstarter for the last two issues here, it includes rewards that will allow you to pick up the full series.  Well worth it.  Tell em, Splank! sent you.
Posted by Ocadpete at 03:51