Of Mice and Ducks and Tiger Tim 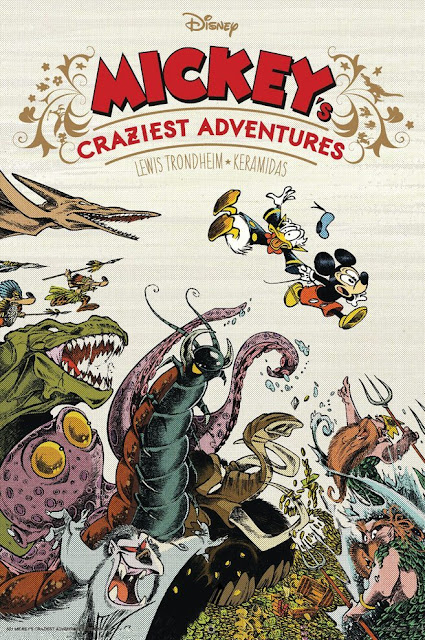 I've just read the comics highlight of the year, well for me at least.  You take my favourite comic characters, add in one of the best and most original artists working in the medium today and add in six months of anticipation as I've waited for this book to be translated from the original French.

Since I got word it was on the way I've been watching the post box like a six year old on his birthday.  But it arrived today, Lewis Trondheim's "Mickey's Craziest Adventures", and yes, it is a Disney comic.

My fascination with anthropomorphic (Funny Animal) comics started with my very first comic hero.  I was just three or four years old and he was a Bear.  A white Bear in a red pullover with a yellow scarf.  His friends were a badger called Bill, an elephant called Edward, a mouse named Willie and a Pekinese dog with the profoundly non-PC name Pong-Ping.   They lived, together with all manner of other talking animals and mythological creatures, in the idyllic English village of Nutwood.

He was Rupert the Bear, and the 1964 Rupert Annual, collecting colour versions of the daily strip from the Daily Express, was read to me on an almost daily basis for the next year. These were stories of fantasy and magic, of Wizards, Mad Professors and wild adventure in far-away lands.  But all with the certain knowledge that the band of friends would get back to their safe woodland home in time for tea.  Rupert was a phenomenon, popular from his first appearance in 1920 right up to the present day.

The storytelling style of the Rupert stories harks back to the comics of the early twentieth century.
The illustrations had no speech bubbles or sound effects, instead each panel would have a two line rhyming couplet beneath it, with the story written in more detailed prose at the foot of the page.   Rupert was halfway between a storybook and a comic, the illustrations were superb.  It was work of real quality and the stories were engaging and filled with wonder.  Perfect for the pre-schooler and young primary-school kid.  There was only one problem, there was just one annual a year and, for me at least, that wasn't enough.


Thankfully, my mother, who was a Primary School teacher, was determined that I would always have something to read.  She arranged that each week a local newsagent would deliver a comic for me.   The first one was called Playhour and I remember nothing about it except that it included a weekly strip called "Tiger Tim and the Bruin Boys". 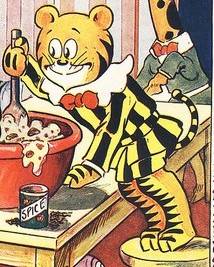 Tim was a tiger, and his friends were elephants and monkeys and Bears.  They lived at Mrs Bruin's Boarding School and were decidedly more badly behaved than Rupert and his pals (nobody had friends, they were always Chums or Pals).  But not so naughty as to be a bad influence on me.

By the time I discovered Tim, his comic career had been going for almost sixty years.  He'd first appeared in 1904 in the comics section of the Daily Mirror before moving to The Monthly Playbox.  He then moved again in 1914 into the pages of Rainbow, where he would continue to appear until 1956 when Rainbow was replaced by "Tiny Tots".  He'd moved to Playhour in 1959, a few years before I first discovered him.

The strips followed a simplified version of the Rupert style, prose beneath clean illustrations.  The stories were simple, but recognisable as versions of the school stories so popular in the early days of comics, designed for younger kids.  A sort of preparation for Billy Bunter and his pals.    But the strips were often in Black and White and the artwork was not up to Bestall's exacting standards.  Still, I was taken enough with the strips that when Tim and his chums jumped ship to the Jack and Jill comic, my allegiance switched.

I don't think Jack and Jill lasted long in our house.  There were much more grown-up things to read.  The Beano and The Dandy, with more funny animals in the form of Biffo the Bear, Korky to Cat and the superb Three Bears by Leo Baxendale.  Then there was the adventures of The Victor and Valiant and finally, via the Odhams Power Comics line, Superheroes.  That would have been it for funny animals, had it not been for my sister who was getting a Disney Comic called "Donald and Mickey".

I'd read anything, and so I always looked through her comics and I certainly remember reading Donald and Mickey, mainly it consisted of fairly poor reprints of quite dull stories I have a particular memory of not being impressed by an adaptation of the film Bedknobs and Broomsticks.

But one story kept me coming back week after week.  It was an adventure serial featuring Uncle Scrooge McDuck with Donald Duck and his nephews, Huey, Dewey and Louie traveling the world and it was as good as anything I was reading anywhere else.

I didn't know it at the time, but this was my introduction to the work of Carl Barks.  Barks' was well know across the world, to many he was simply the 'good Duck artist".  Disney did not allow credits on its comics but many fans have talked about checking out Disney comics to see if the artist who drew better than anyone else and told better stories was in the title.  Eventually he would be recognised as one of the greats of the industry but for me he was just the guy who kept me interested in Funny Animal comics.

By this stage I was mainly reading American superhero comics and for many years left most British comics behind.  But over the years I'd pick up many of the anthropomorphic titles that would appear from time to time.  There was Howard the Duck, Usagi Yojimbo, the Ronin Rabbit and Critters, one of the best anthology comics ever produced in the US.  There was, of course, Carl Barks' reprints in the various revivals of Disney comics and the work of Don Rosa who continued the superb Duck adventures pioneered by Barks. 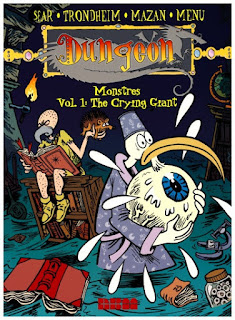 So what is the book that set me off on this nostalgic ramble?  Well it’s "Mickey's Craziest Adventure" by Lewis Trondheim and artist Nicolas Kermadias published, at last, in English by IDW books.


Trondheim is one of the greats of European comics.  Either working on his own or in collaboration with others he produces a wide range of comics that appeal to all ages.   His Dungeon series, is a funny and well-observed parody of fairy tales and role playing games.   The Monster Books for children are funny and beutifully drawn adventures for young, and not so young, kids and his own solo work ranges from the very personal, autobiographical "Little Nothings" series to the wild and funny adventures of would-be space conquerors Kaput and Zosky. No matter what he turns his hand too, he seems to be able to pull it off.

I was fascinated to see what he would do when he was asked to write one of a series of French graphic novels featuring the Disney characters.   The usual Disney limitations were off the table, the writers and artists were to be given much more freedom that had been granted to anyone before.  Trondheim’s volume is the first to be published in English. 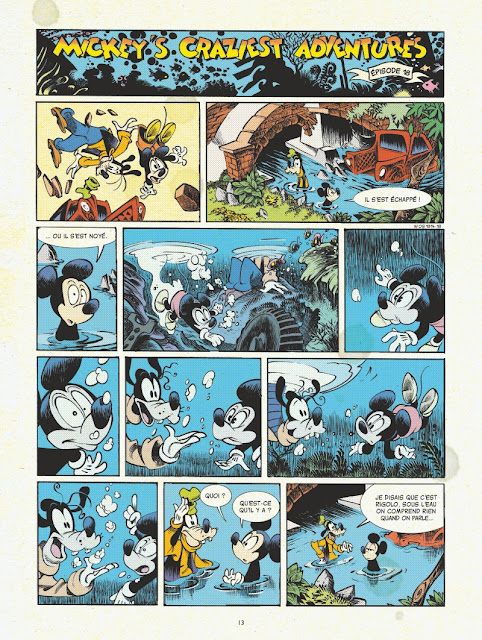 In some ways he's following in the footsteps of Barks' and Rosa.  This is a wild adventure with world-ending meteors heading for the earth, subterranean Mammoths and giant flying mushroom colonies.  He has Donald and Mickey visit the moon, Atlantis and, after being accidently shrunk, spending time in their back garden facing terrifying dangers.  They meet Minnie and Daisy, Gyro and Goofy and none of its makes any sense at all.

But this is more than simply a rehash of old ideas.   Trondheim is claiming that this is a lost adventure of Mickey and Donald, one only previously printed in a poorly distributed spin-off of Walt Disney's Comics and Stories in the sixties, Mickey's Quest.  Trondheim and Kermadias did not write or draw this, they 'discovered it', or at least they discovered some of it.  What we have is 43 pages of the original starting with episode 2 and finishing with 83.  There are episodes missing all through the book.   Pages are torn or dirty and the art come complete with that pixilated look that you used to see with badly printed old comics.

The book works on two levels, as the wildest Disney adventure of all time, and also as an elaborate joke and parody of classic Carl Barks Duck tales and of sixties culture in general.   IDW have done a great job, producing it at the same large size as the original French album and with real care taken in the production values.  It may have come late in the year, but I've been waiting months to see this and it did not disappoint.   Possibly, no, probably the best thing I've read all year.  Roll on the rest of the series.


So there you have it, my favourite graphic novel of the year is a story featuring Mickey Mouse and
Donald Duck, drawn by a Frenchman with a Danish pen-name.  But it was with Rupert and Tiger Tim that my interest in comics, and especially 'funny animals' began.  I never forgot those first comics and I'm not alone in that.  When, in the early seventies, the underground Magazine Oz turned editorship over to a group of school kids for one issue they choose Rupert as the comic character they would have Robert Crumb draw one of his 'obscene' (The courts said so) strips about.  In his League of Extraordinary Gentlemen series, Alan Moore featured both Tiger Tim and Rupert as misshapen creations of his version of Dr Moreau, joining all of the other literary heroes that litter than series.

It’s strange to say, but I suspect that both these less than flattering depictions come from a sort of grudging affection for the characters we loved a time long ago when they were important parts of our childhood.

The Rupert Annual is still produced every year, Usagi Yojimbo is still published by Dark Horse and IDW are the home of Disney comics and while Biffo and Korky have long since left the pages of the D C Thompson comics but a whole new generation of British animal comics can be found in the pages of The Phoenix.  But more of that at a later date.