Dunce! A Comic Strip from Norway,


It's almost exactly a year since I began this blog, in that time I've written almost exclusively about comics from the British Isles.  I'd always intended to extend the range a little, perhaps covering comics from Europe or the occasional American book that really caught my attention.  Until now I've managed to resist that temptation, but an e-mail from a Norwegian cartoonist about his recent (english language) self-published book has been enough to make me change that policy immediately

I'd held back because I've a big pile of books and comics beside, beneath and on my desk that I already want to write about.  Adding to the pile didn't seem like a good idea.  But the cover of Jens Styve's Dunce convinced me to change my mind.

Jens is 44, lives in Tromsoe in the far north of Norway and works in a 'creative house' with other 'creatives with an emphasis on working with young people.  He is a former Graphic Designer who, after years using a computer has returned to the traditional tools of the cartoonist, ink, nibs and pens.

He has recently got a gig supplying a daily, colour strip to a leading Norwegian newspaper a job that will last for four months.  It’s a standard gag strip, normally four panels, about the lives of and relationship between a father and his son.  It's very well observed, especially if you happen to be one of those fathers who still likes video games and horror movies.  I found myself recognising a few incidents from my more pathetic parenting attempts and indeed from my own childhood as well.   At the same time the strip manages to be affectionate, heart-warming and most importantly funny.

Jens sneaks in at least one reference to world politics, which is very nearly the highlight of the entire book and did make me laugh out loud, something comics rarely do, no matter how much I enjoy them.  This is a strip that anyone who has had a child, or indeed a parent, will find themselves smiling at.

The art is stylish and distinctive, but forms part of a clear line of descent from older artists.  There are aspects of Jens’ work that point to influences he acknowledges as early inspirations.  Artists like English illustrator Quentin Blake and the creator of the Moomins, Tove Janson.  Like each of those greats Jens mixes the cute with the slightly grim and frightening and in doing so evokes the delight in a mixture of curiosity and anxiety that most people remember from their childhood.

There are clearly elements of Calvin and Hobbs and visually his figures have something of the look of another one of my comic heroes, Lewis Trondheim.  But there is certainly no deliberate attempt to look like these artists, I think we can say there is a definite Jens Styve style.

Jens offered Dunce through Kickstarter and the limited edition he made available in his campaign is gone, but by checking out his web-site you can get yourself a copy of a very singular, very accessible and really entertaining book.  I'm going to be watching for the next campaign and will let Splank! readers know when the time comes. 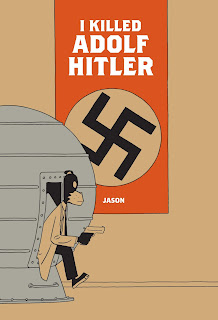 Jens has been kind enough to point me in the direction of some other cartoonists and I'll be following up on that information.  He has also reminded me that one of my favourite European cartoonists is also from Norway.  Jason, the pen-name of John Arne Sæterøy, produces sparse, minimalistic comics.  They are often wordless or at least contain very little dialogue and no captions at all.  They mainly include anthropomorphic characters and are often fantasies of one sort or another.

I’ll get to writing about Jason at some time in the future but for now this gives me an excuse to include the cover of one of his best books here.  And you can try to imagine what it’s all about.