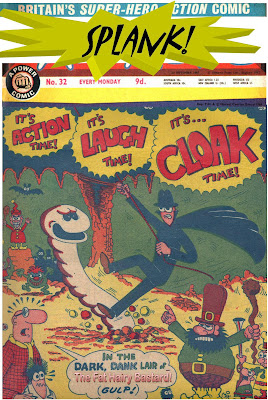 I began this Blog just over a year ago, on April 1st 2016.  It started with a post about Splank!, a totally imaginary Irish version of “Pow!”, one of a trio of unique and, by fans of a certain age, very fondly remembered comics of the sixties.

The three titles, “Wham!”, “Smash!” and “Pow!” were a mixture of anarchic humour strips by some of the best cartoonists the UK had to offer, some off the wall British adventure stories and one of the first regular and organised reprinting of the Marvel Superheroes.

The first of title “Wham!, had its origins in an offer made to Leo Baxendale by the Odhams management in an attempt to lure him away from D C Thompson, publisher of the monsters of humour comics, The Beano and The Dandy.

Baxendale had totally revitalised the Beano with the creation of characters like The Bash Street Kids, Minnie the Minx, Little Plum and its excellent spin-off strip The Three Bears.  He had been one of a number of artists who had embraced a wilder style that had given British comics a fresh new look and who’s influence would be felt for many years.

But Baxendale still faced restrictions at the more conservative and controlling D C Thompson, and when he was offered a better page rate, more editorial freedom and a comic with bigger pages and better printing he jumped at the chance.
Wham! kicked off in June of 1964 and Baxendale was tasked with gathering the talent to fill its pages.  From the Beano he brought Ken Reid, who drew the remarkable Frankie Stein, in his own grotesque style but Baxendale ended up drawing too much of the comic himself.  He felt he was compromising or repeating himself.  Readers were delighted, I recall a real thrill at the obvious difference between these comics and everything else that was available.  Even as a six or seven year old I could tell that these comics were special.  But for Baxendale the comics were not what he had envisaged.

In his autobiography “A Very Funny Business” Baxendale’s frustrations with the politics and compromises of the Odhams group are made clear.  Wham! was never quite of the quality he wanted it to be and when financial issues caused the inclusion of Marvel Comics Superheroes, in the form of Fantastic Four reprints, he felt the title was spoilt.

But Wham! was successful enough to spawn two sister titles.  Both Smash! and Pow! featured the same mixture of humour and superheroes.  Ken Reid provided a trio of the best strips with his career with “Queen of the Seas”, Dare a Day Davy and my own favourite “The Nervs”.   Baxendale gave us Grimly Fiendish, the spy spoof “The Man from BUNGLE and a number of successful riffs on his old Beano strips.

There was also Mike Higgs and his superhero send-up, The Cloak, which to this day remains one of my favourite comics.   Mix that with Spider-Man, Daredevil and Nick Fury and you have the comics that I regard as about the best Britain has ever had to offer.
My April 1st post was inspired by these comics and they deserve a much longer and more detailed article.  That will either appear here at some stage or as the boring bit at the back of my next project.  For while in reality, Splank! may never have appeared in the Sixties, I’m planning to bring it to life now.

Ideally I want to produce something in the format of the old British Annuals.  I've already begged, borrowed and, not quite, stolen strips from a number of top cartoonists including Belfast’s own Davy Francis.   From the Beano, Nigel Parkinson and Leslie Stannage have helped me out and, much to my delight, Mike Higgs who wrote and drew that very special Cloak strip for Pow! and Smash! has written a strip based on a plot which I put together.

I've got some excellent work from current masters of the self-publishing scene.   Andrew Pawley, creator of the GalaXafreaks comics and Marc Jackson, whose very distinctive style can be seen in the online comic Aces and in every issue of Comic Heroes, have both made excellent contributions.

I have a great set of designs for characters I’m planning to use in place of the Marvel Superheroes which Duncan Scott, the very talented former Dandy artist put together for me and I am already working with the creator of Captain Wonder, John Farrelly from Newry in Northern ireland

But I’m greedy and I want more.  I’m asking comic writers and artists who would like to get involved in this project to contact me.

I’d like to represent as many of the styles and genres of British comics as possible. The book/magazine will be printed in a mixture of colour and black and white and at A4 format.

I’m looking for offers of contributions from writers artists or complete stories that fit into any of the following categories.
-          Humour strips, think Wham!, Smash! and Pow! but also Beano, Dandy, Monster Fun and the like. Be anarchic, bring old concepts up to date or hark back to memories of great strips of the past.  The Power comics featured spy spoofs that fed off the movie and TV craze at the time.  Something that mirrors that, or other TV memes that are current now.  I’m looking for single page strips, half page gags or longer stories where warranted.  I’m also looking for an artist to help me with a newspaper style strip that I may scatter through the pages.

-          Adventure stories. Think the old British Hero sets, Robot Archie, Black Max, Janus Stark and Adam Eterno were my favourites.   I’ve no formal page limits at the moment, but think 7-8 as a sort of maximum with 3-5 being a norm.

-          Sports Stories. I always liked football comics more than I liked football. But a good sports strip would be a great addition.  My own preferred sport is Rugby Union and I think I could come up with a few good Rugby gags if I had an artist to work with, but I’d be delighted to look at ideas about almost any sport.  But please, bear in mind that any strip about international Rugby Union should end with an emphatic Irish Victory.


-
Spooky stuff. I maintain that Misty, and to a lesser degree, Spellbinder were among the best comics produced in the UK. A Misty style ghost or supernatural story would be a superb addition and very much welcomed.


-          Factual strips.  Remember Look and Learn, Tell Me Why, World of Wonder?  Strips that tell stories from history or science or current affairs.


-          Nursery Comics – I learnt to read with comics.  Things like Rupert the Bear and Tiger Tim.  I don’t want a strip for young kids but perhaps something that is done in that style would be interesting.

All of these are just ideas and I’m willing to look at anything.  I'm especially keen to get strips with female protagonists, so far I have none and it stands out like a sore thumb.

I’m aiming for a PG-13 vibe so bear that in mind and if you have any questions please do contact me and we’ll see if we can bring Splank! back for the first time.

All characters should be original, I’m not looking to tread on any copyrights here, and will remain the property of the creators.

If you are interested in becoming part of this project please do contact me.  Writers should send a proposal for their story or, get in touch to discuss what they might look at.  Artists should send some samples of their work and an idea of which story types they are most interested in working on.
This could be fun, let us see what we can do.