Captain Wonder and the Mundane Fantasy

I'm supposed to be researching the 2000AD sports stories, but I'm afraid I keep finding myself reading whole issues instead of concentrating on just the strips I'm supposed to be looking at.   I must learn to discipline myself better or this is going to take a long time

So just to keep things moving a quick post on a couple of comicky things that have happened this past week or so.

Last night myself and Andy Luke, author of "Axel America and the U.S. Election Race" visited the Framewerk Gallery in East Belfast for an exhibition of comic strip art.  The comics were by John Farrelly an art-school dropout (that sounds really cool), former civil servant (not just so cool) and current caricature artist (moving in the right direction) from just outside Newry in Co Down.

Part of the Belfast Comedy Festival, the exhibition is of twelve of the best examples of John's "Captain Wonder" web-comic.  The story of a comic shop owner turned ineffectual super-hero, the strips are full-colour, newspaper style gag strips that somehow manage to be slickly drawn, clever and actually funny.

His target audience is probably people with more than a passing interest in comics, especially those with some involvement in the industry.  But the slapstick humour and clever jokes will be easily accessable to everyone.  He pokes fun at the conventions of the super-hero comic and the inherent stupidity of guys in tights fighting crime, but there is more to Captain Wonder than that.

There are genuinely good jokes here, observations about shopping with his sisters’ turns into a set about the good Captain choosing his costume.  A calamity with a coat caught in a car door becomes a crisis with a cape. (Too much alliteration guys?)

Too often parody comics hit the mark in terms of honing in on the foibles and foolishness of their target but forget to be funny.   John has an instinct for comic gags, both in terms of his dialogue and his visuals.  You can see his influences, the slapstick comes from the Beano or the Dandy.  The slick, and very attractive artwork, owes something to the French bigfoot style and would not be out of place beside Spirou or Lucky Luke and there is just a touch of Mad Magazine great Don Martin in the character design and, as john and I discussed, in the walk of Captain Wonder.


The exhibition has been on all week at Framewerk on the Upper Newtownards Road, but sadly finishes tomorrow.  The Belfast Comedy Festival has published a free comic featuring the first fifty of John's web-comics to go with the exhibition and it’s well worth calling in just to get a copy of that.
Oversized framed prints of the strips are available and look great, have a chat to the gallery about those when you visit or have a look at John's web-site here.

Just a quick word on Framewerk.   Its nice to see a gallery willing to look at comic art.   To host exhibitions like this.   Might be worth some other comic creators contacting them to see if we can find a regular space to highlight comic art from Northern Ireland. 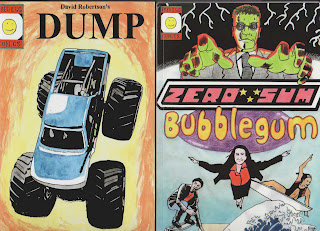 David Robertson of Fred Egg comics has been kind enough to send me copies of a couple of his most recent collections of strips, ""Zero Sum Bubblegum" and "Dump 3".   David's specialises in slice of life stories and a kind of 'mundane fantasy' that includes things like Princess Leia musing on her relationships with men or a story where a time machine is built for the puspose of stealing a specific model of early coffee maker.

Many of the strips depict what are little more than incidents, thoughts or ideas put down on paper rather than complete stories but many of these are poignant or moving.   Some, I'll be honest, left me scratching my head wondering what exactly he had been getting at, but all were, at the very least, interesting.  About half of each collection showcases David's own art, with the rest consisting of collaborations with other artists.

David's art style is functional, naive.  He isn't going to be working for Marvel or DC or any of the other big publishers.  This is what I think of as 'zine art'.  What used to, way back in the eighties, be referred to as mini-comics or more recently as comix.  Comics for everyone, a sort of punk-rock "who cares how good you are, just do it" style.

Some of the collaborations are more polished artwise but David's work is effective.  Most notably in a three page strip called "Silently Falling" where a whole backstory can be inferred from a very few words and some simple images. 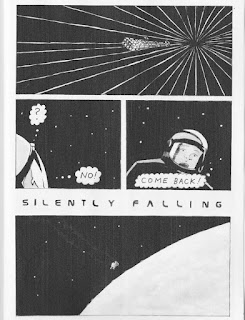 David understands story-telling and communication, but he makes the reader work.  Nothing is laid out on a platter for you.  He presents you with incidents and the story or idea is contained within.  I will admit to not quite knowing what I was looking at when I first looked at the books.   I was prepared for something that was pretentious or just plain dull.  In the end I found myself enjoying them and certainly understanding why he'd done them.

These comics are not for fans of superhero books.   They are not about alien invasions or supernatural evils.  They are about late library books, or swear words on a scrabble board.  Nobody is going to want to take individual panels and turn them into posters and a lot of people will just look at them and decide they are not for them.  I get that, if David hadn't sent them to me I would ever have read them.   But I'm glad I did and I really enjoyed them.  I'm not sure I'm qualified to pass judgement or review them, but I think I know a few readers of Splank! who would appreciate them and guys, I'm willing to learn.

In addition to the Fred Egg web-site there is a also a blog well worth checking out for David's writings about comics.  The most recent post (as I write) is a Bash Street Kids inspired strip - well worth looking out for.  You can find it here.

Back to the hard work now, I've a lot of issues of 2000AD to read and there is coffee to be drunk.  I might even tackle that difficult looking scone.   I love being retired!