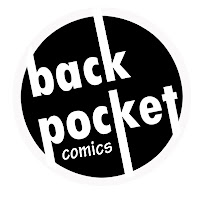 I recently got a package from a couple of guys from Portadown in Northern Ireland who work under the name Back Pocket Comics.  I'd contacted them about a Kickstarter campaign they had started.  The page they had set up was a little sparse.  Low on images and information.   It's not had much attention in terms of pledges and I'd asked if they any more information on their comics.

They sent me some examples of their work along with a plea that I'd "go easy on them".  That almost goes without saying guys, when I see a project like this I'm starting off looking for things to like, not the other way round.  These are two friends, Steven Young and Richard Davidson, who decided that they could make their own comics.  More than that, that they would and now I have in front of me a 240 page Graphic Novel, a colour comic and a black and white test print of what will be their second book and all done in their spare time.   Of course I'm going to 'go easy on them', whatever else they actually got off their back sides and did it and that deserves respect and support.

The Kickstarter campaign they are running is for their Graphic Novel, "The League of Mundroo".  A story of betrayal and deception in an order of  "good" assassins who kill targets selected by their Grand Master "For the good of the world".

Its set in an indeterminate place at an indeterminate time in the past.  Co-written by Steven and Richard with most of the art by Indonesian Philip Kuriawan.  It's an impressive package.  Squarebound, good quality paper with a colour cover and black and white interior art.   There are a few problems with the design of the cover, the title is a little lost in the background of the cover art and the credits at the bottom are almost unreadable.   But overall this is a professional looking Graphic Novel that would seem at home on the shelves of any comics shop.

There is a real Manga feel to the book, I don't read a lot of Manga anymore but the artwork seems to be influenced by the old "Fist of the Northstar" series from the early eighties, but just a tad less violent.   There is a touch of Conan style fantasy and I can't help thinking that the guys have also spent time playing the Assassin's Creed game.  This certainly isn't a copy of the game but it has a few themes in common and the some of the characters have a similar look in the early pages.

The book is fast moving and for the most part the storytelling is clear and the plot engaging.  The guys do seem to understand that less can be more in terms of text and they allow their artists (American Skylar Clark finished off the book) to do the work in depicting the action.   Of the two illustrators, Philip Kuriawan is, I suspect, the more experienced.  His pages, which make up the vast majority of the book, are well-laid out and he understands how to use sparse background details to accent his storytelling.  Philip Skylar does a decent job of moving the story along, but his art is rougher and less polished than Philip's and I felt it was a little jarring when I came across it in the book.

And while I'm on a bit of a rant, I don't really like the lettering.  I much prefer hand-lettered comics, or at least comics that use a font that looks like it is hand lettered, but I think I saw a few sound effects in this book which were in Times New Roman - please NO!

All that being said, I read the book in a single sitting.  Not because I had to, but because I wanted to.  I was enjoying it.   Its in a genre and of a style I don't follow, but it kept me interested to the end and while there was nothing startlingly new, I was impressed by Steven and Richard's story and especially with their understanding of storytelling.  But I was most impressed that they just up and did this, they had the belief and the desire to see their story on paper.

These are guys just starting out.  Their very first book.  As things go on they will improve, they already have another title ready, a colour superhero comic, "The Vim Initiative" written by Richard Davidson on his own with art and less irritating lettering by someone called "Sleigh". 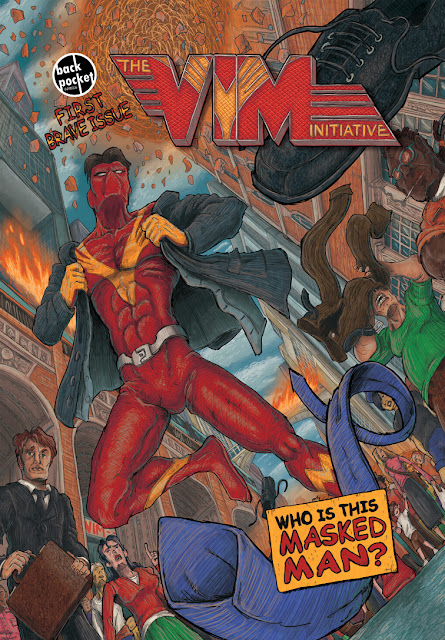 Its a totally different style, and an interesting take on the idea of the superhero.   There are flashes of a very impressive artist to come in the layout of some of the pages and a nice, uncredited, colouring job.

They also sent me a copy of Steven Young's new title, "Tarik", another ultra violent fantasy title, but already you can see developments in storytelling from Mundoo.  The art, this time by Sherwin Santiago, is also a step up and I'm looking forward to reading the whole story.  I think this is a test print with more work to do on it.  I hope so as the lettering on this one is horrible!  But its a good, solid enjoyable comic.

The guys only have "The League of Mundoo" on their Kickstarter at the moment.  And at £20 including P&P they don't have any low cost options other than an offer for bookmarks and badges.

But these guys are ambitious, have big plans and have achieved a lot so far.   Its exactly the sort of project that deserves support from people interested in comics and in encouraging new talent.    Who knows, a copy of the very first Back Pocket GN, signed by the two guys could be something special in a few years.

If you are interested you can find their Kickstarter here and their Facebook presence here.  Those of you living in Northern Ireland can find both "The League of Mondoo" and "The Vim Initiative" for sale at "The Comic Book Guys" in Belfast and Buzzard Comics in Newry.   Watch this space I think these guys will be mentioned here again.