The words "Beano revamp" filled me with fear when I heard that this week's issue would involve a relaunch of the comic along with the new web-page.  This is the last remaining, traditional kids humour comic from the UK.  There are other children's magazines with comic strips, some of them very good, but nothing where the strips are the main course and not fillers between advertising and photo features.  But Nigel Parkinson has been saying for a while that there is nothing to fear so I guessed we'd be all right.

The first revamped issue came out today and my fears have all been set aside.  In terms of the strips it's almost business as usual.  The main difference seems to lie in the logo and the intention to have one longer story at the start of each issue.

The last few weeks have seen a continued story featuring "Walter the Softie" and his Dad trying to take over Beanotown.  In this issue Dennis, Minnie, and Roger team up to save their home and our comic from the forces of dullness.

In an eight page story by writer Nigel Auchterlounie and artist Nigel Parkinson, that is a sort of Crisis on D C Thompson earth, the three team-up to save us all from boredom and defeat Walter and his Dad.  Its a good, funny story with little bit of parody of other comics just for us oldsters.  If this is the shape of things to come then the comic looks to be in good hands.

Otherwise its very much business as usual.  Belfast's own Leslie Stannage contines to give us Calamity James and Hunt Emerson's strip, where he makes readers the heroes of their own stories, is still on the back page.   The Bash Street kids are still there, the Numbskulls, Gnasher and Bananman all feature.  This is still the comic we know, the logo probably stands out a little better on the shelves but otherwise this is very much business as usual.  Beano is probably still the main gateway drug for kids to get into comics and I can't help thinking that the idea of eight page stories featuring Team-Ups of the best known characters is one that may keep slightly older readers involved for longer.

Nigel Parkinson's Blog - interesting words on the creation of the logo and cover from the artist on Dennis the Menace and Minnie the Minx. 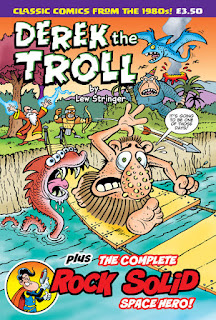 Beano is pretty good at rotating strips and that means that some great characters and artists can disappear from the comic for a while.  Lew Stringer's run on Pup Parade has come to an end and is therefore  missing from the relaunch issue.  But Lew's work can still be found in Doctor Who Magazine and Toxic and you can keep up to date on what he is doing on his Lew Stringer Comics Blog.  In addition he has just self-published a collection of a couple of his very early strips.  Derek the Troll, comes from the gaming magazines Warlock and White Dwarf and was published between 1986 and 1987.  This is paired with Space Hero,  Rock Solid from the anthology comic Swiftsure published by Martin Lock's British publishing house Harrier in 1985.  Coming to an end a month before Derek the Troll was published.

Harrier was a part of the black and white boom of the eighties and a lot of titles were published, many of them with badly sub-standard artwork.  Most of the material was Fantasy or Science Fiction and Lew's SciFi  humour strip did stand out as among the most professional looking strips in the line, apart from some of Eddie Campbell's work.  Sadly it only lasted until issue 5 and the character disappeared until this revival.

All of the familiar characteristics of Lew's art are there in both strips.  The attention to detail and the combination of an understanding of his audience and a freedom in his slapstick sensibilities.  Derek the Troll was for gamers and uses the foibles of the gaming world as a target for some very gentle poking.  This is a great collection and a worthy follow-up to the excellent "Brickman Returns".   It's £3.50 a shot, plus £2.00 P&P and can be found at Lew's on-line shop here.  If you are quick you might be able to get hold of a copy of the original Brickman book as I think Lew has a very few copies left.  All well worth reading.

A good week for British comics, the anniversary issue of 2000AD was great and Beano survived a revamp unscathed.  Coming soon a look at the other bastions of the British comic industry, "Commando" and the relative newcomer "The Phoenix".