Splank! - Back from Holiday Catch-up


Just back from a few days by the sea in St Ives, the only place I ever been to which can rival Northern Ireland for the number of bakeries per square mile.

I was interested to see that Cornish Pasties, which are for sale in each one of those bakeries, have achieved Protected Geographical Status under EU law, meaning that only pasties made in Cornwall are deemed worthy of the name.   Have to say though, I'm not totally sure just how traditional a Thai Green Curry Cornish Pastie is? 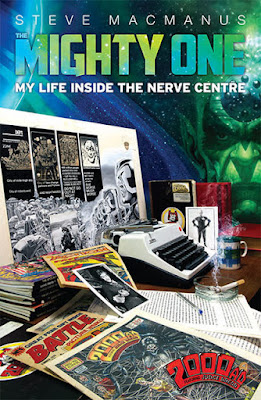 My holiday reading was almost all comics based and included 'The Mighty One', by former 2000 AD editor Steve MacManus.  The book, available as a limited edition pocket-sized hardback or as a standard paperback, is an account of his career to date with a special emphasis on his time as editor of the Galaxy's Greatest Comic.  While most of the attention has been on his account of his 2000AD years I was fascinated by the early part of his time with Fleetway.  Steve worked on Valiant and was a major part of the introduction of Battle, which was one of the first step towards the rebellious and vaguely anti-authority tone that eventually allowed 2000AD to come from what had become a staid and old-fashioned British comics scene.  Steve is direct and honest throughout and his writing is skilled and concise.  He manages to be very direct and makes his feeling clear about some of the writers and artists he worked with in just a few sentences.  His commentary adds a new dimension to many strips and now that I'm home again it has sent me looking at old issues of Valiant, Battle and 2000 AD in a slightly different light and will, I think, lead to a few posts on Splank!  Not as lavish as the official history of 2000AD in Thrill-Power Overload this is a better read and almost certainly closer to the truth.

Amazon link to the paperback edition of The Mighty One.


While I was away the mighty Paul Trimble officially announced the dates for the Enniskillen Comic Fest in 2017 along with details of some of the guests.   There is, once again, a real emphasis on 2000 AD with John Wagner, Carlos Esquerra and Alan Grant being among the first guests announced along with the excellent Colin MacNeil. 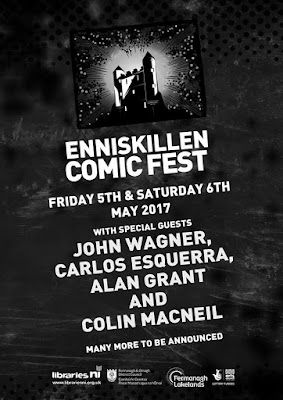 The Fest was one of  comics highlights of the past year for the (very small) Splank! team.  A really friendly atmosphere that was reminiscent of fan gatherings of old.  It was also a con where the emphasis was on comics, and British comics at that, not so much on TV and movies.  What's more, Paul and his team made this a festival for the general public, not just for the die-hard comic fans.   Visits of writers and artists to local schools and art contests for local children made this an event that spread the word about the joys of comics rather than excluding newcomers.

I know that there are some more great guests to announce and can't help but think that this would be an excellent excuse for some British creators to take a wee trip to Northern Ireland, perhaps visit the Titanic Centre, visit some of the countryside from Game of Thrones and try out some of the really excellent Irish Whiskey that is now available, I can help with that.

Maybe take a table at the con as well?

The weather will be great, I can almost guarantee it, after all it never rains in Enniskillen in May, never. (Looks towards the heavens with trepidation  as he waits for lightning bolt).

Finally I have to mention the launch of Andy Luke's book "Axel America and the U.S. Election Race" which I reviewed just before I went off.  Andy has been working hard promoting this book so take a look at his blog with its pictures of the launch event or watch his YouTube video here which sets the scene for the novel.  The book is a distillation of some of the more frightening aspects of  American politics into an acerbic and funny novel that is all the more disconcerting because so much of it rings true.  Channeling the style of the underground movement of the sixties into the politics of the present day, this is strong stuff that is as likely to offend as it is to entertain, and all the better for that.

Now available on Amazon, please take a look and see what you think yourself. www.amazon.co.uk/Axel-America

Over the next couple of days I'll be catching up on some Kickstarter Projects that I think you might find interesting and starting work on a couple of longer 2000 AD based posts.