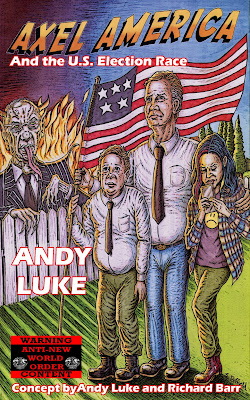 I've not covered novels in Splank! before, and I don't really intend to make a habit of it but when a Belfast creator of adapts one of his titles into prose form I'm going to pay attention.

Andy Luke is a writer and  "maker of comics", he has contributed to the superb, double Eisner nominated anthology, "To End All Wars'" and produced a series of titles of his own including 'Gran', 'Absence' and 'Bottomley'.  His prose has appeared in a number of anthologies including Tense Situations from Orb Books and Horrified Press' book "12" a collection of Doctor Who fan fiction with a story set in West Belfast.  He hosted and co-produced "Invisible Artist" for Belfast community TV station NV TV, a documentary on self-published comics and their creators in Belfast.

Andy thinks about comics, and how they can be used to communicate and educate and its easy to see that he has poured a huge amount of that thought and effort into his latest venture.

"Axel America and the U.S. Election Race is his first novel, an adaptation, or perhaps more accurately, an amplification of his collection of short comics "Hold the Phone its Alex Jones".  Its not easy to describe, at first glance it appears to be a vicious parody of the American political scene, viewed through the eyes of some of the extreme conspiracy freaks that seem to be becoming more and more mainstream at the moment.   Alex runs his own TV station, bringing his truth to the American people.   The novel is the story of Alex and his family as Presidential Candidate Morgan Rump and Faux News attempts to make use them for their own purposes.

The book is funny and the prose frenetic capturing the fury of a group of people who have lost all trust in the political and business class and the mainstream media which supports them.  At first glance the sheer volume of different fears and conspiracies that Axel and his family believe in seems outrageous, but a quick visit to a few alternative media web-sites is enough to see that Andy is not creating, but condensing, the madness of some of the conspiracy theorists into one place.

As I read the book, I couldn't help but think of the Underground press of the sixties.  Andy's prose, whether he is aware of it or now, has similarities to that of writers for OZ or International Times in the mid sixties, carrying the same energy, directness and belief.

A good read and one to make you think.  Andy is launching the book in Belfast on Monday 5th September in the Black Box at 7:00pm.  As I write that is tomorrow, so I'd better get this on-line as soon as I can.

You can buy an e-book version of the book on Amazon right now via the links below and if you want to find out more about Andy and his work check out his web-page https://andy-luke.com/