Before there was Spider-Man or Doctor Strange, Stan Lee and Steve Ditko specialised in a very special sort of science fiction strip for the pre-Marvel Atlas line.  The Ditko stories were smarter and to me at least, more interesting than the Kirby monster tales that seemed to always be the cover feature.

Stan Lee, initially at least, seems to have seen Ditko's work as filler to pad out books led by Kirby stories and as a result often let Ditko do whatever he wanted, from one of Lee's famous one line story descriptions - obviously.  Once Steve had completed the strip, Stan would add his trademark dialogue and another strange masterpiece would be born.

Ditko's ideas tended towards odd little morality plays, which would often stress the 'reds under the bed' paranoia of the time and feature hidden aliens living among us.  But his stories had twists, often pointing out the arrogance of the time, challenging the prevailing view that science and technology would provide answers to everything, that mankind was in control of the world.  Arrogance was a huge crime in a Ditko story and it was one that would normally be punished and punished severely.

These stories stood out from everything else in those old Marvel monster books, not only were they a little off-beat, even slightly anti-establishment, but Ditko's art was distinctive and quirky.  He was the artist who drew men wearing hats long after hats had more or less disappeared, his characters always waved their hands about expressively and he was a master of faces lined with emotion, age or alien skin.

Eventually, in 1961, Ditko was given a title all his own "Amazing Adult Fantasy".  Taking over the numbering from Amazing Adventures with number 7, it lasted all of eight issues.  The final issue dropping the word 'Adult' from the title and featuring the very first appearance of Spider-Man, and that was just about it for these very special little five page stories.  From then on Ditko was drawing Spider-Man or Dr Strange or even, for a while, the Hulk.

I was too young to remember the original comics, even if they had been imported into the UK and if I'd been old enough I wouldn't have bought them anyway.   I was too fond of Superheroes as a kid and would not have bothered with them.  But I did buy the British reprint comics from publisher Alan Class.


The Alan Class books were strange black and white reprint comics with name like Creepy Worlds, Sinister Tales or Out of this World.  They mixed stories from almost every US publisher (other than DC) in a smaller, squatter, almost square package printed on soft pulpy paper that often felt a little damp.  There was no attempt at to continue features from issue to issue, each edition of each title appeared to be randomly put together.


You could find Flash Gordon or the Phantom as the cover star of one issue of Creepy Worlds and the rest of the book made up of ACG mystery strips.   The next issue might have the Tower Comics "T.H.U.N.D.E.R. Agents" mixed with Charlton science fiction strips or the adventures of The Fly from Archie Comics.  But most importantly for me, up until about 1968 there would often be adventures of Marvel Superheroes.

There was usually just one Spider-Man or Avengers story, the rest of the 68 pages being made up of pre-marvel atlas tales.   I remember reading a lot of Kirby and Don Heck stories, but the Steve Ditko shorts were the ones which really stuck in my mind.

It was only years later, when Marvel produced a lavish, oversized reprint edition of Amazing Adult Fantasy, that I realised that most of the stories that had stuck with me came from that title.   But opening that book every page was like an old friend.

I guess the same was true for somebody who worked on the "Galaxy's Greatest Comic".


2000AD Prog 627, cover-dated 20th May 1989 was a pretty special issue.  Not only did Zenith meet Acid-House Archie, one of the greats of British comics, but there were two self-contained "Tharg's Future-Shocks".  The second, appearing under the title "Unlikely Tales Presents - He Met the Moonman" was an obvious pastiche of the old Lee - Ditko stories.

In terms of the artwork "Steve" Marshall, who signed the page as "P Diptoe", got it just right.  There were men in hats, aliens and those weird expressive Ditko hands all over the place.  There was an arrogant space emperor, Bing Ban Boom, and a short, bald, foreign guy (probably a communist) who got his comeuppance at the hands of the good-guy at the end of the story.  In terms of how the story looked it was a really good and quite funny parody.  He even had a badly designed superhero take on an army of Ditko style monsters, although the battle did take between pages.

On the other hand the script badly missed the mark.  It had all the right elements, but none of the inventiveness of a Ditko tale.  Indeed, it seemed to have missed the point of a Ditko tribute and used the very cliches that Steve himself avoided.  And I'm not sure that it would have worked for the core readership of the comic at the time.  Without those readers being aware, very aware, of the Atlas comics that were being parodied, this story must have seemed like a very strange inclusion in a comic featuring Slaine and Zenith and a very good one-off Judge Dredd story.  Its a little ironic that as some of the very best of the Future Shock's seemed to have borrowed from the best of the Ditko stories, when a Ditko parody appeared it wasn't quite up to standard.


Sadly I think that the Amazing Adult Fantasy oversized reprint book is currently out of print.   Amazon appear to have some for sale at about £40 from time to time.  But there are two excellent series of hardbacks reprinting some of Steve's work still in print.   The Fantagraphics "Steve Ditko Archives" reprint some early and very atmospheric Ditko stories from his days at Charlton and Yoe Books, under Craig Yoe has produced two volumes of Ditko Monster Books featuring his work on Gorgo and Konga for IDW. 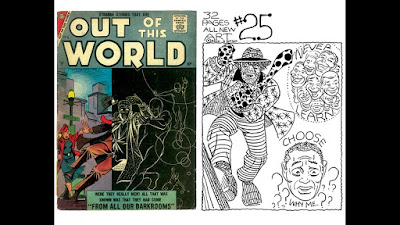 As I was finishing off this post I got an e-mail, letting me know that another new Ditko comic was on the way.  Part of his '32' series and featuring his own ideas on morality and philosophy it will be accompanied by another comic reprinting stories from "Out of this World".  Available through Kickstarter you can find the page to make a pledge here.