As promised a look at some interesting recent activity on Kickstarter.  This really does seem to be the place to find new and exciting talent in the comics field.  I'm limiting myself to UK and Irish creators this time round but all of these projects are worth your support.


First up we have the third issue of Stuart McCune's superb Monologue series.   Stuart is one of the creators I've been championing most in Splank!  He writes smart, engaging stories of real depth, and produces elegant and beautiful art that shows a deep understanding of design and colour. 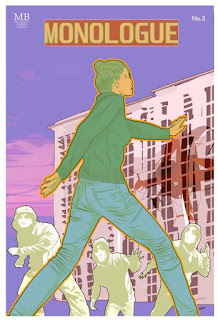 Monologue in particular is an experiment in storytelling, the narrative is not simple and the mystery at the heart of the comic is one that the reader and the female protagonist are staggering towards together.  But this is an experiment that succeeds, that draws the reader in, and keeps them there.  Too often experimental comics are heavy on technique, light on substance.  Monologue is strong on both counts

All of Stuart's comics are a must for me and this final episode in the Monologue series is no exception.  (Stuart has a few paper copies of the first two issues available and if it suits you better he can also supply e-comic versions of all issues).

My previous reviews of Stuart's work can be found here and here and the Kickstarter for issue 3 of Monologue here.  I cannot recommend these excellent comics too highly.

I was less enthusiastic than I might have been for the first issue of Ness, and in retrospect I think I was a little hard on writer Chris Welsh.  Now that the second issue is being offered through Kickstarter I hope to be able to put that right.


My only real criticism on reading the first issue was that the comic was too short, that not enough happened.  But perhaps that is the nature of serials and if Chris moves the story on in this issue then I think all previous complaints will be forgotten.  Dublin artist Rob Carey's art in the first issue was excellent, perhaps a little too dark in places, but atmospheric and effective and he captured and told Chris' story perfectly.  And to be fair there is plenty of story to be to be working with here.


Ness is an "Del Toro/Lovecraft" inspired , giant monster comic set, unsurprisingly, on the shores of Loch Ness.   It has all the elements to be a classic horror story; a group of young. unsuspecting city folk, weird locals, a spooky ritual and a giant, many tentacled sea, or in this case Loch-monster.

My review of the first issue is here, but note that I now think I was a little harsh, and the Kickstarter can be found here. 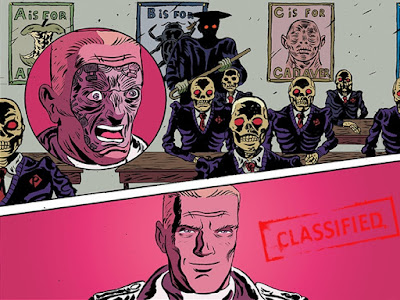 Alex Automatic comes from writer Fraser Campbell with art by James Corcoran.  The story came when the two creators were discussing their love of Thunderbirds and Joe 90 and old ITC adventure shows like The Prisoner and the Avengers.   Alex Automatic tries to combine the innocent excitement of those shows with the sinister story of a broken, dangerous government agent who is convinced that he is a robot super-spy battling the evil PRYSM.


Contrasting the fun of sixties sci-fi adventures with the grim and gritty realism of comics like Miracleman and Casanova this promises to something worth a look.


From the available samples, James Corcoran's art is bold and chunky, with something of a Kirby edge.  Its interesting to see that Shaky Kane has produced a print to go with the Kickstarter campaign as his influence can certainly be seen in the artwork for this comic.  Take a peak at the Kickstarter page here and you can find a link to order Fraser's previous comic, Sleeping Dogs, from Cabal Comics here.  I've not had a chance to read it myself, but it is on order and I'll review it in Splank! once it arrives. 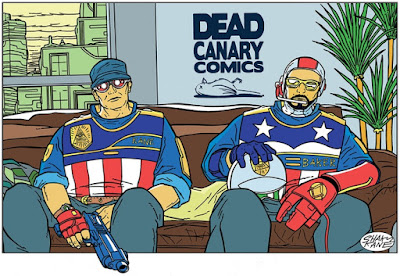 And speaking of Shaky Kane, next on the Kickstarter list is "Last Driver" a 60 page collaboration between the psychedelic punk artist and writer C. S Baker for Dead Canary Comics.  Its the tale of Frank Sudden having a good time at the end of the world with giant mutant monsters, motoring and general mayhem. 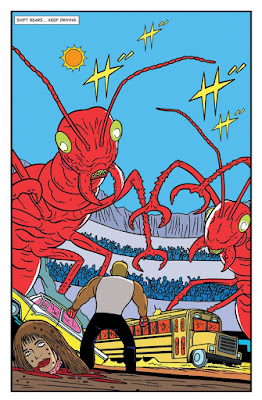 The visuals are unsurprisingly, stunning, coming from an artist whose psychedelic punk artwork with Jack Kirby influences, has appeared in the pages of  2000AD, the Megazine, Revolver and Escape and a few years back in the superb Bulletproof Coffin series from Image.  This look like fun with a capital 'F' and you can get a preview of how Shaky and C.S Baker work together in the free online strip Campaign 2079 here.

I've followed Kane's work for years, not always understanding what the hell was going on, but in recent years his style has warped a little, losing the obvious Kirby influence and a little of the visual anarchy.  I'd argue that this has allowed more of the true weirdness of his visuals to shine through and that the Bulletproof Coffin series was among his best work and should have made him a star in the comics world.  Its interesting to see him working for a British small-press publisher and shows even more clearly that there is much to be admired in the self-publishing comic industry in the UK.

Anything with giant insects, dinosaurs and guns is OK by me, check out the Kickstarter page here for more details. 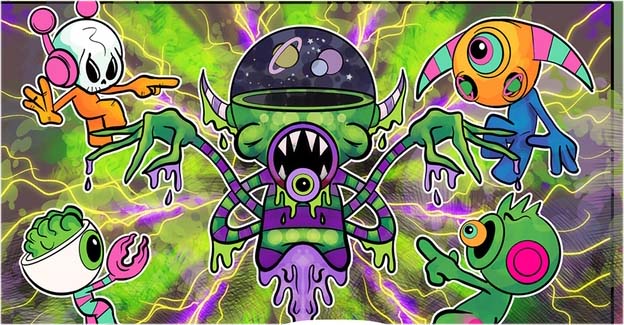 Last but not least is another Splank! regular and one of the few who can rival Shaky Kane at the psychedelic weirdness.  Andrew Pawley is back with the fourth and final issue of GalaXafreaks Dark Vibes.  I'm running out of ways of describing this comic.  Its got the wildness of sixties acid trip art, combined with a cosmic, quantum story-line.  There is artwork that will thrill, if it doesn't burn out your retinas first, and a script that sounds like professor Brian Cox has been caught imbibing some bizarre mushrooms from the garden.

This time round the evil Fuzz-Muff has absorbed the Higgs Boson baby that contains the GalaXfreaks universe and corrupted and deformed reality.  To find out if Meeko and the GalaXafreaks can defeat Fuzz-Muff and bring harmony to the polyverse you need to buy this issue.

If you want to understand what the hell I've just said you probably need to buy all four issues.  Lucky for you Andrew still has all of them available through this campaign.  I'm a fan, have been since the first issue I saw.  Still not sure if I've understood any of it and don't really care.