2000 issues for any comic is quite a milestone, even more so in today's market.  Buts its a milestone that has even more resonance when the comic in question is 2000AD.

Issue 2000 will be in the shops on Wednesday, but subscribers copies and pre-orders have already been delivered.  There are two newsagents covers, one by Chris Burnham featuring a recreation of the classic McMahon cover from prog 168 and a Tharg wraparound by Cliff Robertson with a wonderful Glen Fabry version available through comic shops.

This is no ordinary issue of 2000 AD, its one for the longtime fans.  A celebration of some of the characters, writers and artists from the past who made 2000 AD the Galaxy's greatest comic.  Single pages from Bolland and McMahon along with Carlos Ezquerra on a Dredd story that features a great guest star, are among the stand-out features, but it was the Pat Mills and Kevin O'Neill reunion on Nemesis the Warlock that was the highlight of the issue for me.

I could just as easily be mentioning David Roach's art on the Judge Anderson tale or the reappearace of  Rogue Trooper but I'm not intending this as a full review and don't want to include any spoilers.  Suffice to say this was a real treat for a long-time reader.  So often special issues like this are disappointments, but I think the guys got this just about right.  The right memories are reignited and the stories are all more satisfying than the usual annual or sci-fi special one-offs and none seem forced or overly contrived. 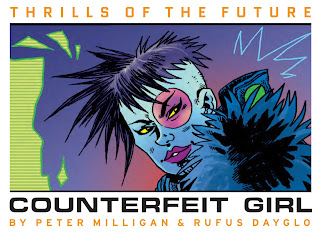 But in case you might think that this whole issue is nothing more than wallowing in the past, the powers that be at 2000AD have also included the first episode of a brand new story by Peter Milligan and Rufus Dayglo, "Counterfeit Girl".  An excellent decision showing that 2000AD is not relying on its illustrious past or aiming at the nostalgia market.   I'd not been reading the title for quite some time. picking it back up a few months ago when I found myself with more reading time.  I'm now catching up with the past few years and really enjoying what is now a properly grown-up comic, that has some seriously good stories but manages to retain the same sense of anarchy and fun that it has (nearly) always had.

2000AD still has some way to go to catch the Beano.  This Wednesday sees a revamp of the 78 year old classic comic with the publication of issue 3854.  I've no details of what the changes might be except that there is a new logo and the definite article appears to be missing from the comics' title.   A new web-page, which aims to be a safe page for kids to use the net was launched this weekend and the intention appears to drive the Beano brand into the 21st Century.  What this means for the weekly comic remains to be seen, but with creators like Nigel Parkinson, Lew Stringer, Laura Howell and Hunt Emerson all working for the title in recent months its been in a good place for quite a while.   I do hope that the revamp does not mean a move towards the magazine format of so many other kids comics with the subsequent loss of comic-strip material.  Our artists are too good at this stuff for us to lose any more of the comics industry.


If you want more info on the contents of 2000AD prog 2000, I'd suggest you read Colin Noble's full, yet spoiler free review, in Downthetubes.  Or even better (sorry Colin) just go out on Wednesday and get a copy.

Worth mentioning that this Friday sees the regular monthly meeting of Belfast Sector House 13 at the Parlour Bar in Belfast.  With prog 2000 just out this one could be a bit special.   Check out the group at their Facebook page and I can tell you all that my own experience is that they are very welcoming to newbies.  I certainly intend to be there.

The new Beano web-page, with videos, jokes and a few comic strips can be found here.