Some comics just look different. Distinctive.  You know instantly who the artist is.  That's especially true of small press and self-published comics.  Outside the strictures and conventions of the main publishers there are no rules and creators are free to work in their own style.  The small press scene gives us access to comics that are different and special, and we are lucky enough in Northern Ireland to have a few creators who fit.   Nobody is ever going to mistake a comic by Davy Francis or Paddy Brown as coming from anyone else. (I've recently binge read the 10 issues of Paddy's "Cattle Raid of Cooley"), an excellent, and quite late evening.

A couple of weeks back I received a couple of new comics from another Northern Ireland based creator, Stuart John McCune of Millicent Barnes comics.  I think they qualify as really, really different.

Stuart's comics have a distinctive style.   His figures and faces are not in any comic-book style I recognise, owing more to modern fine art than Kirby or Ditko.  But they are more expressive and distinctive than anything you'll see from Marvel or DC.  His backgrounds can be sparse, but he uses colour to build atmosphere and set the scene for the action of the comics.  He's created two related series that I'll write about at some length when I get a moment Mack and Mondo and City War.  Digital versions of these are available from his own site along with other titles and and there are a few items available through an Etsy page.  You can find the links at the bottom of this post. 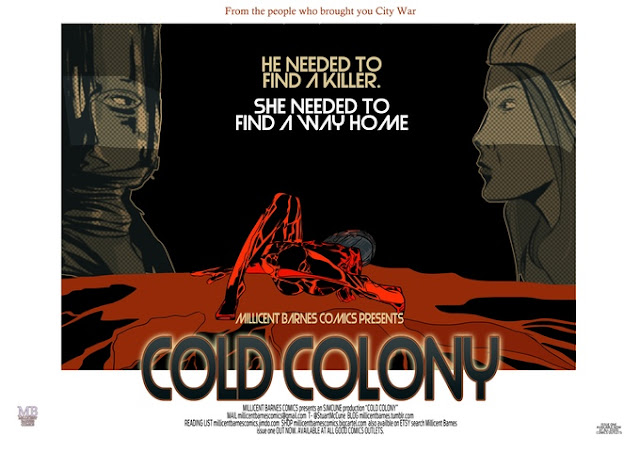 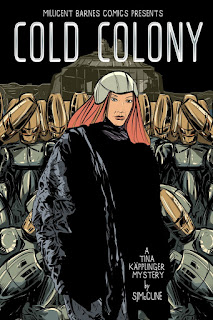 The first of the new comics, Cold Colony, has all the claustrophobic tension of the movies that the Kickstarter campaign claimed as inspiration.  We were told to expect something in the spirit of The Thing, or Outland and that's just what we got.  The story is set on a mining colony on a distant planet and everything about the comic screams out constriction and tension.  There is nothing comfortable or bright, from the beginning there is simply a sense of growing unease.  The plot is relatively simple, and would not have been out of place in an old marvel mystery comic, or one of those science fiction anthology TV series of the fifties, but this comic is all about atmosphere and Stuart succeeds in building that atmosphere.

What is most impressive about the script is the world-building that goes along with  the story.  While never hitting us over the head with long winded exposition, we get a clear idea of the universe in which the story is set from clues that drop in naturally in dialogue and allow us to build up a clear picture of the universe as we read.  Too many comics insult the intelligence of the reader, this isn't one of them.

As always with the Millicent Barnes titles, the artwork has a distinctive look.  I particularly like the design of the gold helmeted miners and the company manager and the small number of exterior scenes, but whereas Stuart often makes use of large areas of empty space in his comics, Cold Colony is very different     You can find more details of the comic on its Kickstarter page. 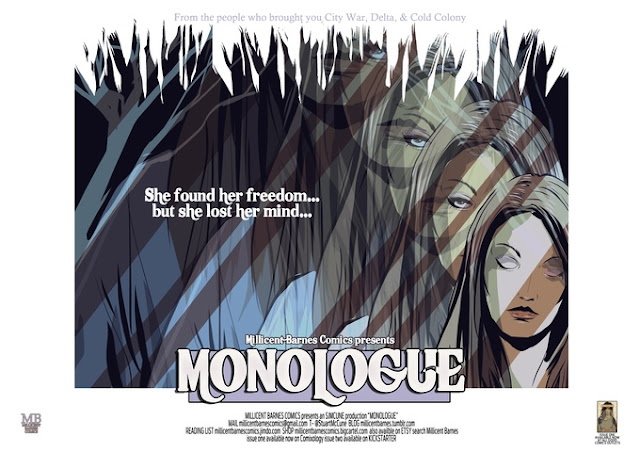 And then we have Monologue issue 2.   I'm not sure how to describe how it looks.  Elegant again comes to mind, designed, sparce, beautiful.   All through the comic are panels that look like they should be prints and yet it all hangs together as effective comic storytelling.  Stuart clearly understands the language of single images but more importantly how they come together to form comics.

I'm also beginning to get some ideas of Stuart's preoccupations and interests.  This story, which could be one of madness or could equally be a simply Ghost story, reminded me of where I had heard the name, Millicent Barnes, before.  There is a bit of clue in this post, but it'll be more fun to figure it out for yourself.  I think this is an improvement over issue 1, its one of the comics I've enjoyed most in the past few months and I'm looking forward to the next issue just as soon as he can finish it.