Quantum Capers with Fuzz-Muff and the Dark Vibe Underlords 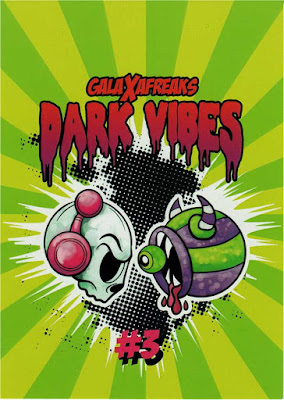 A very short post to let you know that issue 3 of Andrew Pawley's superb "GalaXafreaks: Dark Vibes" fell across the quasi-dimensional threshold that I call a letterbox this morning.   So hot off the presses, Andrew has not quite managed to get the issue up on his web-site shop yet but by the time you read this it might well be there.  Also in the package was the trade paperback collected edition of the now out-of-print first GalaXafreaks series.

Dark Vibes 3 is the same mixture of influences, taking so much from the Psychedelic sixties and mixing it with the language of quantum physics and a little bit of the comics of Jack Kirby.  I also got the feeling this time that the GalaXafreaks are a type of far-out, drug-induced version of the Green Lantern Corps.

But while the core of the comic stays the same, there is progression and change.  Comparing the collected edition of the first series with issue 3 of Dark Vibes, you can see an evolution in everything. He has experimented with backgrounds, layouts and even lettering and issue by issue these become tighter as more successful techniques and ideas come through.  The dialogue, while continuing to mix archaic hipster jive-talk, with the vocabulary of quantum physics also seems more focused, and tells the story more effectively than before.  Its great to have the collection, and I can really recommend it, but if all Andrew was doing was repeating the same things over and over again then the appeal of the comics would fade quickly, as it is I've just spent a great morning reading some really strange and entertaining comics.  If you want to catch up with this really weird world then visit galaxafreaks.com and check out his online shop.

So Andrew, when is the next issue out?
Posted by Ocadpete at 10:10