Advice to self, when you are planning to write a blog (or do anything else) don't start re-reading Douglas R Hofstadter's "Godel, Escher and Bach, an Eternal Golden Braid".  A 700+ page meditation about the meaning of the word "I" and the nature of the self.  An amazing book that needs every one of the 700 pages it takes to use metaphors from art, maths and music to say the un-sayable about what it is to be aware and conscious

Finished it and still slightly in a state of shock, but I've a little pile of self-published comics that I bought over the past couple of months that I've been intending to write about and they act as a pleasant sorbet on the reading palate.  All labours of love for the creators and all self-published, but otherwise covering a really wide range of subjects and styles.  Just goes to show how vibrant and varied the UK and Ireland scene is in terms of self-published comics.  I'll work my way through the pile in the coming days.

I'll start with one that fell through my letterbox recently.   "Doc Dino", from writers the Chris' Ward and Welsh and artist Mac Radwanski was funded through Kickstarter and tells the story of Dr Tyrannosaurus Rexley, the greatest surgeon in the world.  Or at least he would be a great surgeon, if only he didn't have certain physical limitations. 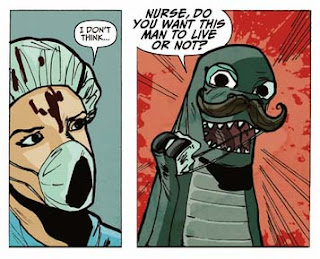 This issue, the first of two, tells a sad story of student excess and lost love and sets up an epic confrontation with stolen medical-robot technology for the second issue.  And all the time the great tragedy of the world's greatest surgeon being held back by his crappy wee dinosaur arms hangs over everything.   Its a kind of dark romance comic, a science fiction version of the old DC haunted love titles but with robots and dinosaurs and laughs along the way.   The writers, have produced a funny and fast moving script and Mac Radwanski's art is well up to the job of turning it into an entertaining comic.  If I was to criticise, it would be that like so much art produced on computers, it looks a little too dark on the printed page.  My pdf copy actually looks better on my PC screen than the printed version.   But that's a minor point.  Still a really nice comic and I'm looking forward to issue 2.

You can get hold of a copy of Doc Dino here, and watch out for issue 2 appearing on Kickstarter 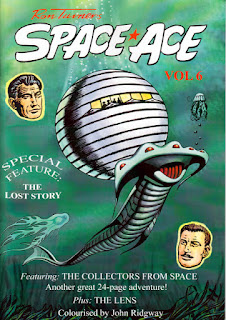 Something totally different is Space Ace vol 6. from John Lawrence.   A magazine-sized glossy reprinting early Science Fiction strips by one of the greats of British comics, Ron Turner.  The new issue features "The Collectors from Space", a serial originally published in Black and White in the pages of Lone Star Magazine in 1956 now "colourised" by John Ridgway along with a story from the Lone Star Annual of 1961, Space Ace and the Lens.  During his career, Turner would work on many of the great British science fiction comics series, Rick Random and Nick Hazard in the fifties, Stingray and The Daleks among others for TV21 and he also drew Judge Dredd for 2000AD.

The appeal of Turner's comics lies in his clean lines, his attention to detail in his design of aliens, spaceships and other worldly landscapes.  He later developed a very distinctive style, evident in his work on Rick Random, Nick Hazard and later on Stingray and the Daleks for TV21.  That style is not fully in view here, but in some ways the art is looser than his later comics, less stiff and posed and the spaceships still look great. 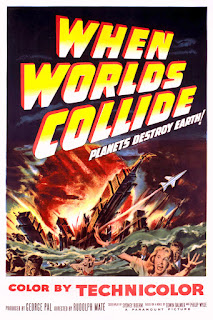 This is the future as seen from the early fifties, an alternative, perhaps a more imaginative vision, than that seen in the pages of the more celebrated  British space hero of the time, Dan Dare.   Turner had a deep interest in science fiction and you can sometimes see where his inspiration came from.   In "The Collector's from Space" its clear that he is using ideas from When Worlds Collide, the 1951 classic movie in his plot.

Much of Turner's published work was produced illustrating other people's scripts, here we see him working on his own.  Purists may complain that the art has been adapted to turn several episodes into a seamless story and that colour has been added to comics originally produced in black and white.  But the production is superb and John Ridgway's colours do add a new dimension to the strips.  I missed the first volume of John's new series (anyone know where I can get a copy), but I've read all of the rest and I'm looking forward to the next.

To get hold of a copy of Space Ace vol 6 and any other issues John Lawrence has available drop him a line to Spaceace.54@virginmedia.com.   Other great Ron Turner comics are available.  The Rick Random Space Detective collection edited by Steve Holland can still be found and a privately published collection of the short lived Tit-Bits Science Fiction comic (I'm not making this up) turns up from time to time on ebay.