It’s a niche genre, comics with vegetables as the lead characters.  Sometimes, as in Bob Burden’s “Flaming Carrot” or Sarah McIntyre’s, “Vern and Lettuce” a comic might appear to be about an edible plant at first glance, but then you find yourself disappointed to discover that it’s really about a man who has taking on the identity of a root vegetable or a rabbit named after his favourite food.

So up to now those trying to avoid red meat in their comics have had to depend on the wonderful “Tales of the Beanworld” or finding a copy of the first issue of Norway’s bi-annual anthology comic, Bergen, described as being “hallucinogenically healthy” and entitled “Vegetable Comic”.

But just recently there has been another addition to the genre, and it’s from the UK, it’s self-published and it’s by one of my favourite cartoonists. 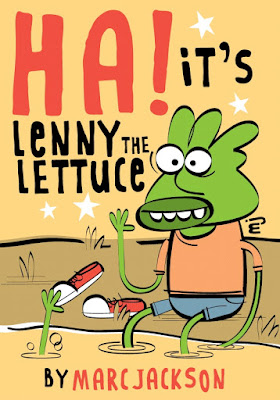 Marc Jackson, from Macclesfield, has had work in the Beano, in his local paper and in the Brooklyn Red-Hook community newspaper.   He has a single page strip in each issue of Comics Heroes magazine and appears regularly in the on-line comic Aces.  His work is bold, energetic and very distinctive.  His new comic is no exception.

“Ha! It’s Lenny the Lettuce” is a full-length, magazine-sized epic about a lettuce who is late for work.  Lenny is Marc’s Beano character, but this self-published comic is not a collection of his Beano stories but a brand-new full length story.  Its manic, almost stream of consciousness stuff involving birds, superheroes and some really niche shopping outlets.

Up until now Marc's self-published comics have been A5 size, so I wondered how his artwork would look on the larger page.   I have to say it works brilliantly, increasing scale also increases the impact and the surreal humour moves things along at a great pace.  Marc has a great eye for character design and layout.   Even the background colours add something to the assault on the eye.  Add to that, Lenny the Lettuce is one of those humour comics that is actually funny and you have real winner.

I will declare an interest here, I'm working on a project of my own to publish a comic later in the year and Marc is one of the contributors.  He's one of the most prolific cartoonists out there and  a real joy to work with.   More on that in the coming weeks.   Marc was also the driving force behind the Macc-Pow comic festival in Macclesfield earlier this year.  Like our own excellent festival in Enniskillen this year, a very different type of comic convention from the big commercial shows.

Have a look at the festival Facebook page here.

Check out Marc's Tumblr page for details of how to get hold of Lenny the Lettuce and other great comics.