Chris Baldie and Michael Park's Space Captain is one the gems in the British world of self-published comics.  Its a well-written, beautifully drawn science fiction comic that is so much more than the Space Opera that it appears to be at first glance.  I wrote a fuller outline of the series a couple of months back just after issue 2 came out. (You can find that here)  At that time Chris thought that issue 3 might be delayed for a while, but I'm delighted to say that the Kickstarter page for the third issue has now gone up and is sitting at about 300% or the required funds with most of the extras, in this case a sketch by Chris, already gone. 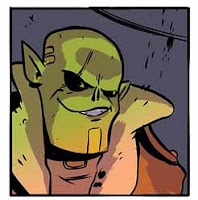 For issue 3 Chris and Michael promise us jungle action and giant lizards and perhaps more fumblings towards the final fate of the earth in 40 A5, full colour pages for £5 (postage paid) or £2 for a pdf.  I know I'm repeating myself, but Space Captain is an intelligent, funny and genuinely moving comic with a great plot and superb art that owes a lot to the European big-foot style.  I do wonder if a collection might do well in the French BD market?

The Kickstarter includes bundles of all three issues or you can buy issues 1 & 2, along with other comics from Chris, at his online shop here.